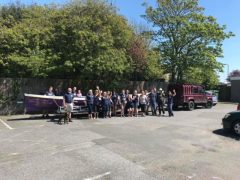 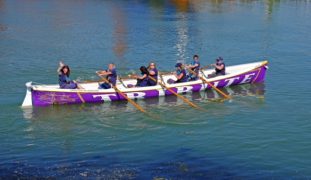 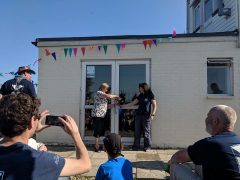 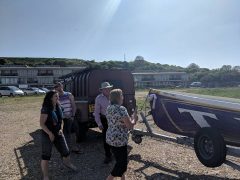 On the 5th may Newhaven Gig Rowing Club had their first AGM, opening of the gig clubhouse and launch of 7 stars – Club in a box gig. This was an exciting and busy day for them.

The AGM took only an hour at the sea cadets hall. In the meeting the committee was set all roles voted on. The Chair Nikki Tweedie covered the history and plan for what will be going on for the next year. This involves the set up of Junior Rowing, Owning Amelie the wooden gig and saving for a 2nd gig. Training for regattas and world champs in the Scilly’s isles. Next AGM date has been set for June next year.

Celebrations at the clubhouse kicked off early with amazing cakes and drinks. The whole of the area was decorated and tidied thanks to the hard work that everyone had put in the few weeks leading up to the big event. Seven stars, tribute gig from club in a box was driven onto the land between the clubhouse and slip way. This gave everyone a chance to go and check out the new arrival before the launch.

NGRC members and public were invited, along with the mayor of Newhaven June as one of here last events before handing over to Paul. Just after 15.00 the manager Mike of Newhaven Marina and June toasted Seven Stars, tribute gig. She was then launched from the slip way in the marina. This was the first opportunity NGRC have had to use the slipway since being allowed access to it and the clubhouse. Thanks to the support from the marina management and Barron Homes. The launch went amazingly and the first NGRC crew to row her looked over the moon. 3 other rows went out after to get a feel and cox’s a chance to get to know this amazing gig better.

Seven stars, tribute gig is part of Club in a box. The project has been funded by British Rowing, Sport England and the CPGA (Cornish pilot gig association). The project aims to facilitate clubs who are in the early stages of their development. The gig is named the Seven Stars after sponsor St Austell Brewery’s first pub. She spent the first year at London Cornish, and now her second year of this project she is in Newhaven.

This is an oarsome opportunity of NGRC and the local community to get out on the water and keep this traditional style of rowing alive.

Thanks to being granted club in a box and a club house Newhaven Gig Rowing Club now are happy to announce that they will be having a regatta starting this year on 25th August. It will be under the name of Waterbourne. There will be a chance for novice crews from NGRC, Lewes, London Cornish, Langstone, Hamble to name a few clubs to race from the marina to Southease. Then the race crews from each competing club will race from Southease though the harbour, out to a buoy off Seaford beach, before sprinting back up the harbour and across the finish line. All boats will be going off at different time’s so you will not know who has won until later on in the day.

If you would like to know more about the regatta or join NGRC please check out their website www.ngrc.co.uk or email admin@ngrc.co.uk

There are loads of learn to row sessions each month, once sweep stroke and maiden voyage has been completed. Then the competent crews can book on social, race, technique, endurance, adventure rows.

If you would like to be a stall holder at Waterbourne please email Lee on leestclair58@gmail.com

Posted on February 8, 2018September 30, 2020 by StrengthCoachWill
This article is Part 4 of the Rowing Injury Prevention Series. This series of articles will take us right up to… read more

What colour rowing boat would you choose?

Posted on February 2, 2017September 30, 2020 by Rebecca Caroe
I am about to launch a new rowing boat and we are trying to decide what colours to… read more 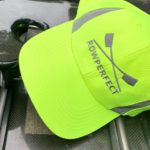 Rowing Hat Wear: How To Clean Your Rowing Cap

Posted on July 27, 2020October 14, 2020 by Tom Wall
Wearing a rowing hat is perfect for keeping your face shaded on a sunny day. But most of… read more