I’m away on holiday in Croatia; it’s incredibly picturesque and epically rural. One thing that came to mind while sipping a coffee in the Venetian built harbour was the Burkeian idea of the wisdom of ages.

While on altitude camp (in final prep for the World Champs) I walked round Lake Silvretta with Alex Gregory (Olympic and World Champ). I regularly have good conversations with Gregors, mainly because he talks with clarity and infectious enthusiasm. He shared with me his personal experiences in the final push before London 2012. He had in turn talked with Matt Pinsent about his many Olympic experiences a year earlier.

I found the ‘wisdom’ Alex had picked up and used from the four-time Olympic champ not only interesting but of real practical help. This wisdom of ages is what makes being part of the GB team different. I often take the achievements of my training partners for granted, the medals are only ever worn for one day, but I never stop enjoying a teammates perspective. Maybe some of my teammates will take up blogging and share them too, or maybe it’s a better idea to save them up for corporate gigs in later life.

Anyway, thank you [Sir] Gregors and Sir Matt, being part of GB Rowing is all the better because you’re willing to share.

Posted on May 4, 2012October 28, 2020 by Rebecca Caroe
Here’s your weekly opportunity to enjoy tales from others who also love rowing. This weekly round-up is for… read more

Posted on December 6, 2012October 23, 2020 by Ben Rodford
Gloucester Rowing Club are the latest club to have a Rowperfect RP3 on trial. They’ve been using the machine… read more 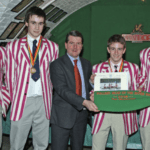