Hanlan’s Spirit – training for flow book by Jim Joy is now listed for sale in the Rowperfect shop.  Or buy both and save!

This book’s importance is the connection between training the body and training the mind. don’t be deceive by the title – although Jimmy Joy has written it in the spirit of Ned Hanlan whose skill and ‘one-ness’ with his scull were legend, the lessons and techniques explained in the second half of the book are appropriate for all coaches and athletes who care about skilful rowing.

The book is in two parts, the first sets out both the history of Ned Hanlan and Joy’s own philosophy of mind/body integration for optimal rowing and sculling experience.
The second part is a tutorial, taking the reader throughout four stages of the rowing stroke release,e recovery, drive and entry. Each explaining where and how to teach flow.

The concept of a “peak sporting experience” is well-known by athletes and coaches – it is described by athletes after moments of intense endeavour and outstanding results as the feeling of ease and slow-motion such that the game seems effortless.

What is Flow in Rowing?

I’ve personally experienced this very intensely once in my rowing life. The Tideway Scullers School womens eight beat the selected England Commonwealth eight in the first round at Henley Royal Regatta. We led almost from the start and as we came into the enclosures on the Berkshire station I felt as if I was watching myself from above, looking down on myself in the bow seat of the eight. I remember thinking I wasn’t working very hard and that I couldn’t’ really tell how high we were rating. I just saw the bows of the England eight moving inexorably away from me as we stretched out our lead every stroke. It was quite extraordinary – almost an “out-of-body” experience and had a dream-like quality. What was interesting was that most of the crew had noticed the same feelings for themselves – we discussed it later with the coach in a debrief. And Kate, my pairs partner who’d been to two Olympics for GB said she’d never felt anything like it in all her international career.

Flow is not necessarily a peak experience like the one I describe above – it is more often described as feeling very focused in the activity and forgetting all outside influences. For a repetitive activity like rowing or sculling, this is a really helpful state because it enables us to practice our technique repeatedly without distraction while feeling very engaged in the very repetitiveness of our movements. Douglas Eby is a sports psychologist, he writes

How did they discover flow?

Psychologist Mihaly Csikszentmihalyi (pronounced me-high chick-sent-me-high) says we can facilitate the conditions for this quality of optimal functioning, and that it may be found in a wide range of careers and activities. For his doctoral thesis on “how visual artists create art” he studied photos taken every three minutes as artists created a painting. He says he was
“struck by how deeply they were involved in work, forgetting everything else. “That state seemed so intriguing that I started also looking for it in chess players, in rock climbers, in dancers and in musicians.

Brazilian soccer player Pele has described days when everything was going right, and feeling “a strange calmness I hadn’t experienced in any of the other games.

I once listened to an interview with Pele describing one of his famously ‘impossible’ shots at goal. He said he felt at the time as if everyone else was moving in slow motion and he could see spaces between the other players where he could move and could ‘see’ where he could send the ball towards the goal mouth.

How to coach flow in rowing

Joy is a very experienced coach and specialises in sculling – his deep understanding of both the physical movements and also the coach’s art of using psychological tricks to enable his athlete to experience and thereby learn is possibly unique. His interest in ‘flow’ has come because he was an

“undersized athlete. It seemed obvious to me that the efficiency of movement was the equaliser, and the way to achieve it was through flow.”

This is a book that any experienced sculler will love to read – for the empathy you’ll feel with the descriptions and the interesting history of Ned Hanlan. But for a coach or an athlete who wants to learn more, who feels that they haven’t yet achieved the nirvana of the perfect stroke or the perfect coaching method – this book is a must-read.

It’s not long; every chapter has at least one idea, technique or process that I wanted to immediately try out for myself. This is the sign of a really challenging book on rowing. There are few books or DVDs that give me any significant learning that I haven’t already read, heard repeated, bastardised and poorly described that I finish the book or film frustrated rather than energised.

The athletes’ personal development is optimised when there is a “oneness” between the environment and the whole person, and between our internal and external selves. The performance becomes fully integrative combining the body, emotions, mind and spirit. This is evident when the athlete is able to coordinate his body action, and then integrate these movement with the run of the shell. This is Flow.

The individual’s spirit is fostered by the coach with the team working as a unit and by empowering the athletes in their training. The athlete is encouraged to create and discover new ways off refining the movements. The coach trusts the athlete to explore, to fail and to achieve.

At the more advanced levels of sculling, a very high degree of monitoring and biofeedback occurs. The coach merely affirms the skill of the performing artist. The coach is rather an odd combination of parent, leader and choreographer.

The critical question is, do you want to be an artful Sculler or a brute force Slugger? The sculler has to be aware that the sensitivity of the single is less forgiving of extraneous movements than the larger eight. This requires constant and patient practice for refinement of the stroke.

It is extremely helpful if the coaching model is based on a combined approach to training, considering the technical, the mind development and the physical. This is a balanced and thoroughly integrated method. 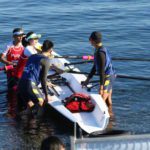 How different is coastal rowing technique?

Posted on July 9, 2013October 20, 2020 by Rebecca Caroe
If you keep a training diary but wonder how your crew is doing with their training, here’s a… read more

Posted on July 23, 2016October 22, 2020 by Rebecca Caroe
I’m working as a coach for masters this summer, first time in a coaching position. 5 years junior… read more