One of our popular rowing expert authors is Jimmy Joy – founder of the Joy of Sculling conference and author of books on the subject.  He takes an unique approach to our sport.  I received this message from him recently.

At the urging of friends I have taken ownership of the stroke cycle. This is a section from the Wonder of Sculling that I am working on. The description of the entry is quite the contrast to Marlene Royle and Troy Howell.

The entry of the Joy stroke is easy to achieve according to Coach Mike Wagner. At full extension the young athlete simply lets the blade drop into the water from the 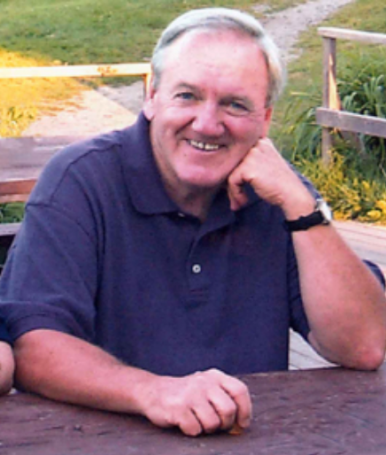 horizontal position. . The blade is not squared to the water and then dropped. The drop comes from the horizontal position of the blade. The blade enters the water at an angle similar to how it leaves the water at the release. The lower edge leads, thus we have lower edge sculling. The blade is quickly covered, so it is a very neat action. I do recall the feeling with the old wooden sculls of the blades moving from an over squared position in the water to a squared position.This action of the blade can be simulated on land with your hands.. How quick this movement is done! The blade completes the Nexus point of the compressed knees, the extension of the arms and trunk, and the seat at the full reach. This is the Joy entry and this stroke did provide me with miles of enjoyable water distance over the years.

The many other parts of the cycle are completed with equal simplicity and ease. The components are integrated and function as an athletic whole. There is a built in feeling of relaxation and coordination to doing the stroking. Nothing is rushed, nothing is strained. I could relate to this ease from my experience with the baseball and golf swings. in each case there was the drive and follow through to the swing. The movements are simple, but underscore complexity when analyzed. Because of my athleticism that I had when I started sculling, the coach could fairly quickly in covering the mechanics of the stroke.

The waterman in England strived to achieve an efficient stroke because their workday on the river was 10-12 hours per day in the middle 19th century. They had to have a fluid and smooth delivery. Consequently, on the fixed seat they coupled the trunk and arm action and this was carried over to the sliding seat. They did use the trunk then arms as the University writers wrote at the time. There was and is a continuous wholeness to the stroke without the emphasis on any one part of the stroke such as the trunk with the fixed seat and the legs with the sliders. On the sliders the legs actually carry the work relationship between the arms and trunk over the full length of the slide. This was a smooth flow between the arms and the trunk. The important startup drill for this coordinated movement is sitting at the back part of the slide reaching and pulling.

At the release the wrist action is minimized and the continuous flow of the movement is again emphasized with the feather occurring early in the movement (blade at 45 degrees and a quarter out of the water) contrast to the full release of the blade from the water before feathering (the square blade rowing is a rectangular action). The combination of the hands, arms and trunk out of bow is fluid and continuous, one motion of five parts made to look like one. Again these two movements, the drive and release are athletic and energy saving, feeling the movement is so important. It is so spontaneous, unconscious and intrinsic.

The recovery is marked by feeling the run of the shell underneath your seated body and again the trunk action is continuous from the hips rather than being set to an angle out of bow (University theorists). The angle changes throughout the recovery and the conscious swing is what brings the seat forward. This creates beautiful timing for the entry with seat, trunk, arms and blade. It is more complex yet a simple fluid movement to the set the angle theory. You are creating kinetic energy as you move forward. Again the fluid athleticism is emphasized. The movement moves from being a conscious effort to an unconscious drift or glide forward, pure energy saving.

Now finally we come to the heart of the Quantum stroke, the entry. Simply raise your knuckles let the blade drop to blade depth only and raise your wrists/pull. There is or should be a great deal of finger action involved. Bob Pearce simply spun the handles at each end of the slide because of being blessed with large hands. Again the wrist action is minimized and you see the blade on the feather and then it disappears. The action of the blade at the entry is down and continuous and not up and pause. It is a two-cycle movement rather than three motions. We spent an enormous amount of time and effort on the release and so the entry was just done naturally.

All of the movements are fluid both in the parts and the whole with everything connected or quantum, everything moving. The words preparation, set, roll up are not used to describe the action. Subtlety, energy saving, relaxed, feeling and athletic are all part of the Joy’s lexicon.

For me it goes back to the “little black book” that Fitzpatrick compiled for me before he left for the USA 55 years ago. He went through the whole stroke cycle so it could be referred to as the Fitzpatrick/Joy stroke. The Waterman’s stroke is somewhat imprecise because they did not write about its specifics. Fitzpatrick/Joy contains elements of Orthodoxy, the trunk swing which is the keystone to the whole stroke, Fairbairn/Pearce, the drive and release, and Pearce/ Fairbairn, the entry, and Orthodoxy again with the timing of the recovery, Pearce certainly emphasized the Bernoulli effect with his blades on the drive and the flat wrists /light hands at both ends of the slide; it was all fingers.Where there is a direct link with the Watermen is through Hanlan. He was admired by the Orthodox people and by Fairbairn for his skills. So it was an eclectic stroke designed by Fitzpatrick from the three streams of his experience. The one piece drive is the seamless pull with no fragmentation into legs, trunk, arms. Secondly, the “oarsman had to get a true feel of the boat. It literally has to become part of him.  Just as a skilled rider is said to become like part of his horse the skilled oarsman must become part of his boat.” The three movements of the body include the arms moving from extension to flexion, the legs moving from flexion to extension, and the trunk moving from extension to extension.

I have added some additional measures over the years to formulate the “Joy” stroke. These include the one to one ratio of the arm movements at the end of the drive and the beginning of the recovery. The three movements of the body include the arms moving from extension to flexion, the legs moving from flexion to extension, and the trunk moving from extension to extension. The trunk swing has evolved into a two-part movement with the conscious swing in the fall followed by the glide forward in the spring. The motion of the shoulders are much more subtle and level during the drive. The “salt shaker’ action has been added to early part of the drive, again conscious to unconscious. The stroke rating has been elevated especially for the eights and the sculler’s entry makes this easier to achieve. I used extensively use slow motion sculling to improve the accuracy of the movements. The emphasis on the integral stroke for the eights is a new approach. The flat wrists and finger action at each end of the slide is a great addition. The latest innovation is the emphasis on the small muscle action in an age where the large heavy muscle is usually employed. It is the recognition and promotion of athleticism that is employed in the coaching.

All of this athletic bodywork is integrated with the flexible and simple bladework. It must not be forgotten that the blades have a continuous blade depth platform throughout the drive phase and the release from the water is elliptical as is the entry. There is no preparation involved at either end. The fingers play a major role in handling these important movements at each end of the slide. The total impression is one of simplicity, ease, flexibility, connection, and coordination. it is a “Joy” to behold because of its precision and athleticism. It is something that I have lived with for 60 years. It fills me with the Wonder of the child as I contemplate its execution.

The Wonder of the child encompasses our mental state that we bring to the Joy stroke. This includes our curiosity, our humility, our mental clearness, our concentrative awareness, and our simple mindfulness. Are we not describing the mental state of the high performance athlete? So following the lead of Cerutty, we look to the child and the animals for guidance and inspiration. We become wise in the ways of the water as Natty Bummpo in James Fenimore Cooper’s writing, was wise in the ways of the woods.

Barry was much admired by George Pocock for his flawless stroke

Jimmy Joy was our guest on the RowingChat podcast

8 thoughts on “Jim Joy versus the Rowing Stroke”

Find a Way, Not an Excuse

How to improve your strength and get good drive 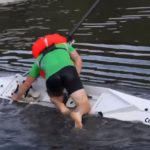 Posted on August 3, 2018October 16, 2020 by Rebecca Caroe
We have got a new product in store – a classic life jacket suitable for coxswains and coaches… read more