Ivan Hooper works for Rowing Australia as a Sports Science / Sports Medicine Coordinator and this is an advisory note he circulated in approx 2012. His slides are at the bottom of the page along with recommendations for rowing coaches on how to prevent injuries from rowing on ergos.

Since I sent out some comments regarding ergometer use, I have had quite a few emails back regarding the use of the Rowperfect ergometer, or putting the Concept II ergometer on sliders. I am aware that there is some work underway investigating this issue, but currently there are not a lot of papers that have been published.

In working through some of the literature I came across a website that goes some way towards explaining the physics of ergometer rowing (Dudhia, 1999). It discusses that a fundamental difference between the linear mechanics of a ‘static’ ergometer (such as a Concept II) and a boat can be illustrated by the following test:

This is not just a matter of the frame of reference: in the static case (ergometer) you are actually performing more work accelerating your whole body weight up and down the slides, thereby creating high levels of kinetic energy. In the dynamic case (boat) your body weight is relatively stationary, creating much lower levels of kinetic energy and thus requiring less work to be done to reverse this kinetic energy. It results in an athlete needing to put in six times more energy just accelerating and decelerating their own body weight, compared to on water rowing. 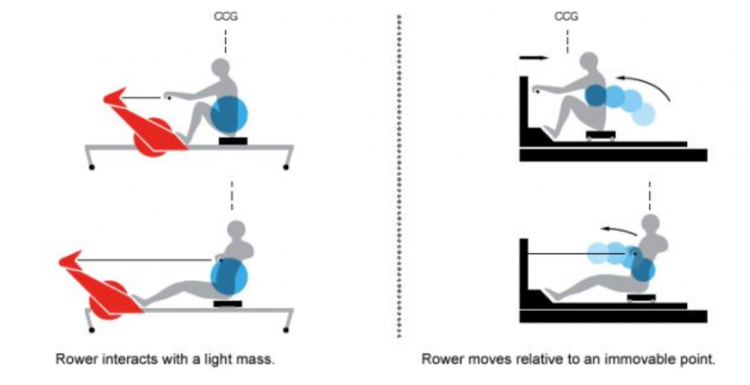 Static erg versus dynamic erg explained.[CCG = common centre of gravity][/caption]A ‘dynamic’ ergometer, such as the Rowperfect, attempts to simulate the mechanics of on water rowing by having the stretcher/flywheel also mounted on a rail. Attempts have been made to simulate the same effect by mounting the Concept II on sliders.

Most of the literature that I have read was performed examining the Rowperfect ergometer in a mobile and fixed state. The weight of the Rowperfect mobile power head is approximately 19kg, which is not that dissimilar to the weight of a single scull. This is the weight that an athlete’s leg drive is moving every stroke. Hence the manufacturer’s claims that the mechanics of the Rowperfect and on water rowing are similar.

The weight of a Concept II is nearly 28kg. When you include the mobile component of the sliders, the weight is around 35kg. If you consider the mechanics discussed earlier, when a Concept II is mounted on sliders there would be more motion of the rower and less motion of the ergometer when compared to the Rowperfect. Hence, my thinking is that sliders probably go a long way to replicating the mechanics of on water rowing, but still involve forces nearly double that of the Rowperfect.

There are two recent papers that have both described the mechanics of static versus dynamic ergometers, using the Rowperfect in both a dynamic and fixed state. Bernstein et al (2002) found that average stroke length on the static ergometer was 53mm longer. They discussed that this is due to the higher kinetic energy associated with moving the whole body mass, as was discussed earlier. Colloud et al (2006) also discussed the higher inertial forces generated during the transition between the recovery and propulsive phases, especially at the catch.

This kinetic energy, and / or inertia, has to decrease to zero for a change in direction to occur, thus something has to exert or absorb forces.  Coming forward this force is absorbed by passive tissue structures of the knees resulting in an 8-10% increased leg compression (Kleshnev, 2005). It is reasonable to assume that the lumbar spine also absorbs some of this kinetic energy, creating an increase in lumbar flexion. Holt et al (2003) supported this when studying the effects of prolonged ergometer rowing. Over a 60 minute piece there were significant increases in the lumbar spine range of motion at the catch and total lumbar spine range of motion.

At the finish it is the large hip flexors that act to decrease and reverse the kinetic energy of the trunk (Rekers, 2006). This places very high loads on the lumbar spine, equivalent to doing prolonged sit ups. This places large sheer forces across the structures of the lumbar spine, potentially contributing to injury (Stallard, 1994).

Both Bernstein et al (2002) and Colloud et al (2006) found higher maximum stroke forces and power when using the static compared to the dynamic ergometer. They suggest that the passive structures of the rower’s joints could be loaded more at the catch on the static ergometer when the lower limb joints and trunk are fully flexed. They both propose that these higher forces, imposed over a longer stroke, may be associated with injury.

Undoubtedly, higher forces applied over a longer distance means more work done by the body’s muscles. More work done means earlier fatigue. Fatigued lumbar spine muscles may allow even more lumbar flexion, transferring higher forces to the passive tissues of the spine. The combination of lumbar flexion and muscular fatigue has long been identified as a cause of lumbar spine injury amongst rowers (Reid McNair, 2000).

After repetitive motion, protective muscle activity has been shown to be reduced, often for a number of hours after the exercise is completed (Gedalia et al, 1999) The ramification for rowers is that, during this period, the athlete may be more vulnerable to injury, even when they may not be experiencing high loading on the spine (Reid McNair, 2000). Ergometer use and weight training are two modalities that are likely to load the trunk muscles more than on water rowing. Based on the findings mentioned above, placing these two training modalities in close proximity is likely to increase injury risk.

This may be an aspect that coaches wish to utilise if they are looking to enhance leg training, but I question the value of this when the load and contraction speeds are significantly different to on water rowing. The other issue is that once the legs fatigue, the trunk then becomes a greater contributor to total work performed. As mentioned above, this leads to a fatigue of the trunk muscles, placing lumbar spine structures at higher risk of injury.

In conclusion, the information that is currently available supports the idea that ergometer use is a risk factor for lumbar spine injury. It also suggests that the Rowperfect places much lower detrimental forces on the rower than the Concept II. It seems that placing the Concept II on sliders is also a way of reducing these detrimental forces, but this is probably not as effective as the Rowperfect.

At this point in time, the Concept II is the standard for conducting physiological testing of the elite rower. I do not propose that this change immediately, but I do think that what machine we test on in the future needs further examination and evaluation. Issues such as injury risk and physiological specificity need to be considered when selecting the most appropriate way to test our athletes.

Erg use and injury

In summarising the information that is currently available regarding ergometer use and its effects on injury, I would like to make the following recommendations:

The recommendations made in this article are based on a balance between possible injury risks, and the acknowledged benefits of ergometer training. Ideally these recommendations are designed to stimulate thought when devising training programs. I would encourage coaches to consider both the potential benefits and the potential risks of all forms of training.

Finally I would like to remind everyone that coaches have a duty to make their crews as fast as possible, without causing damage to the people for whom they are responsible (Stallard, 1994). An ongoing challenge for all coaches is to minimise the potentially detrimental aspects of their training programs.

How do Oarsome handle grips work

Posted on June 23, 2013October 28, 2020 by Rebecca Caroe
Rowperfect RP3s have been bought by many of the top countries competing over the weekend at Eton Dorney.… read more

How to steer the Tideway – navigation rules & advice

Posted on February 7, 2017October 14, 2020 by Rebecca Caroe
Thanks to Stephen Aitken who shared these slides with us. They are a self-teach training plan to help… read more