You won the European Champs – why did you decide to race there?

We went to the European Championships because we’ve had a difficult season.  Matthias who was in our Olympic crew has had back surgery and Basti is the new man.  Everything was OK with Matthias until the German champs but even so we weren’t racing as well as last year.  We did a camp in Breisach where there are fast conditions and we found our rhythm and we blended better with Basti.

The new combination was only together for a week before Luzern and this gave us even bigger problems and was the main reason we didn’t step up to the A final.

Do you all train in the same place?

Yes, our coach is Uwe Bender and we all live in Saarbrucken in an athletes centre.  The crew has been together since 2008.

Tell us about your black boat?

FES made us a boat which we just used in the Europeans.  The reason we used it there and not here in New Zealand is that we only have two Empachers.  One is in Sacramento at the training camp venue and one got shipped here.  Hence we had to use the FES for the Europeans.  It’s the same one we used at the Olympics.  It is different as a boat design but we feel disappointed because people said we were only fast because of the boat.  Last year we were in an ordinary Empacher and we did well [they won gold].

The German team is having a resurgence – why?

We had good results in 2005-6 and in 2007 the mens 8 won Silver.  2008 was a terrible year at the Olympics because most of the team was ill.  Three of our crew had temperatures of 41 degrees and Martin was the only one left standing.

Since Mr Buschbacher came in 2009 he has changed some things.  Sometimes it’s good to try something new.  We have been going our way with Uwe since 2006.  We train hard and at the moment we have good performances.  In the lightweight fours event it’s a close race all the time.

What do you think of the new Worlds race timetable?

We like it because it’s now possible to do both boat classes – the light four and eight.  It is very important if you want to do well you need a good four plus a minimum of two spares and then we can build up a crew.  This helps the U23s to step up.  We learnt how to go fast in a pair and Jost and Matthias learnt in the light eight.  You need a good eight and a good pair for a good four – they create pressure on the top crew from behind.  And it also makes really good spares if someone is sick.

Which of you started rowing first?

We started together on the same day at Speyer Rudergesellschaft.  [both laugh]

What’s the advantage of being a twin in this sport?

We know each other better than normal guys.  We trust each other more.

Say your training practice before competition doesn’t go well.  You know you can trust your brother.  We are both going in one direction and by the time the race comes you can forget the morning.  One bad stroke in the race and we both just trust each other and do the next one better.

So what happens next in your career?

The U23s are learning for the future from us.  We have a big squad for 2016.  Maybe after 2012 we will retire.  What is important is that there is an overlap when we row with the U23s so the young guys take over.  They have to learn but we give them and who them what to do.

We learnt from other guys when we were U23 but the German squad wasn’t so strong then.  Our title last year was the first lightweight win in 12 or 15 years.  The crews had made finals in 2002-3 but didn’t succeed in the Olympics in 2004.

Was the result in Beijing your reason for continuing?

Beijing was not the only reason we decided to continue.  [Martin] I left the day after our race on a plane home.  I couldn’t feel anything.  I had gone and watched other sports and people winning and I didn’t feel anything.  We didn’t speak for 5 or 6 weeks.

[Jochen] And then Martin called and we had a chat and decided to continue.

[Martin] In those 5 weeks I coached a women’s quad in Austria for FISU and a W2x in Belgrade at the Student Worlds.  It was OK to see racing from the other side as a coach.  I thought “not yet” for myself.  Then I went training in Vienna and Ottensheim and the fire returned.  I was in the single, on beautiful, flat water, a view of the hills and it felt good.   You row for nothing and have a clear head.  After that we talked and decided to row.

How do you manage work and training?

We both work for BASF and we had a contract with them to start work again after the Olympics.  The company came and offered to release us after the disappointment.  They said tell us what you want and we’ll find a job and discuss everything when you are home.  We understand.

We are also training to be police officers.  They allow you to do as much sport as you want.  And the contract at BASF is open.

Are there other professional athletes in your family?

Our parents are very supportive but nobody else is a professional sportsman in the family.  They are at every regatta.  They enjoy the trips and it’s good for us because there is no pressure – it’s just supporting.  This is an important factor as to why we can row so hard. 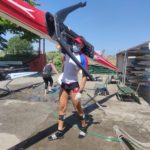