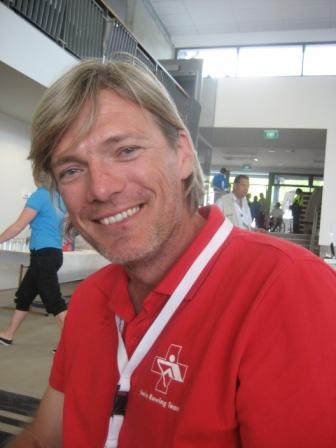 This is your third year in the job – what are the main differences between Switzerland and UK rowing systems?

The main difference is the number of people involved.  In the UK 20,000 people row competitively and in Switzerland it’s around 50!

Talent nurturing is a major part of my work.  If anyone’s within a minute of the ergo target they get invited to the national training centre in Sarnen.  People don’t generally come forward and approach you asking to row.

How do the national team train?

Sarnen is the national centre and the top crews don’t train train there full time. The current squad are mostly students or working and only the locally based crews (M2x) come there every day.

Next year I will be asking for them to come 3 days a week in the winter and 4 in the summer.

The club coaches must be very important to you

Yes the local coaches keep in contact with us and I have to travel around a bit as well to see the clubs.  Typically my athletes come from all four corners of the country!  The clubs are our biggest sponsors and they also pay most of the money for the athletes to come to the Worlds.

The Swiss national championships are a week before Luzern and that’s very important that they compete for their clubs there – but it’s bad timing as far as the international squad gots.  But that is part of the deal.

How does the funding work?

There’s a communal fund that they all pay into and the club or the athlete pays 60% of their costs while they are on the national team.  This is very like the UK system in the 1980s.

Is this your biggest team?

Yes we have 14 athletes on the squad at the Worlds now.  It is certainly the largest in recent years.  We have 6 boats and two are into the semis.  W4x is in B ifinal and LM2- and LW1x as well.  11 have been to the Worlds before.

The language differences are obvious for me as an English speaker.  But the attitude is also very different.  Generally the Swiss as a nation don’t back sport like folks in the UK do or NZ.  This is the thing I’ve tried to change.

As far as the training environment goes they can say “it’s very nice” but remember there’s a very high standard of living in Switzerland and most people can choose to do something other than go out on the water when it’s wet and windy.

As far as the training pattern of the rowers go the luxuries are there in their training.  But the basics of quality and quantity of training were missing.  This group has bought into my philosophy and committed to doing the hard work.  In the first two years I had to push hard to get the work done but now there’s some momentum and the athletes are doing it and I can step back.

Posted on April 22, 2011October 21, 2020 by Mohit Gianchandani
Tyne United Rowing Club has been recently set up in order to promote competitive and recreational rowing at… read more

Rowing Race Plans – how to write

Listen to Ben Hunt-Davis on RowingChat

Posted on May 27, 2013October 21, 2020 by Rebecca Caroe
We recorded our conversation with Ben for you – download or stream his wisdom on our SoundCloud Rowperfect… read more