Following our article about testing Rowing Force Curve analysis in a rowing tank, we got a great question from Graham Spittle
Fascinating stuff and Helen’s angles and power curves are so consistent.
I have a C2 so can get one dimensional power curves to some extent but not sculling differentials of power/angles for bow/stroke-side. I’m a long time (G) bowside sweep rower and late to sculling. I think I am finding my right leg is dominant (common apparently) and seems to make getting a stable start demanding and troublesome (assuming the rest of my technique is perfect!!??)

Is this Docklands tank setup/service permanent and open to the rowing public to get the same analysis.

I’d be interested – a useful investment (if it’s not bankrupting!!)

The simplest way to adapt and adjust your personal force curve is to start with an indoor rowing machine.

Of course, I am going to suggest the RP3 because its force curve displays in real time and the athlete gets the best chance to understand what their body did which produced THAT force curve.  The large size of the curve display and its extreme sensitivity (it changes very clearly when you move differently and deliver power differently).  This gives a giant advantage over other rowing machine software [no need to explain why] and also an advantage over on-water rowing where you can’t see a force curve in real time, only numbers.

Peaks and Valleys in PM5 curve

Using mirrors to watch yourself, and a coach watching or videoing you, the opportunity to see how you row, see what the force curve shape is and make changes to your technique is huge.  The instantaneous feedback allows the athlete to take ownership of their technique and figure out for themselves what contributes to an improved force curve. 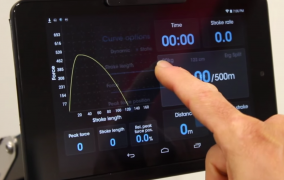 If you learn a technique change, you can then take it onto the water. 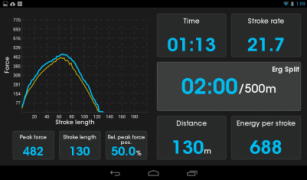 In a rowing or sculling boat the opportunity to change your stroke is somewhat different.  You are limited by the weather, the availability of crew members to hold the boat level for you while you row and the technology you can use.

To see a force curve – the options are limited to numeric displays on the water and most offer off-water force curve graphs.

There are lots of choices and you will find that your selection is based on your bank balance, and the level of detail analysis you want, plus your time available to do the analysis.

What are the advantages and disadvantages?  Let us know in the comments.

2 thoughts on “In-boat force curves for rowing and sculling”

Posted on December 4, 2016October 16, 2020 by Rebecca Caroe
Each month subscribers to the Rowperfect newsletter are included in a free prize draw to win one of… read more

Posted on November 30, 2012 by Rebecca Caroe
Here’s your weekly opportunity to enjoy tales from others who also love rowing. This weekly round-up is for… read more