Well the obvious answer is Doh….make the boat go faster than the guy you’ve been switched with is the way to win a seat race.

This is a guest post by the LaunchExhaust Blog (sadly discontinued) but you can read the archive here.

Ok, snarky, sarcastic, obvious comment aside, selection time is upon many teams as the spring rolls on. Seat racing, if it hasn’t been used yet, will be used soon by most coaches here in the United States. We like seat racing because it doesn’t involved the mechanical, dry numbers of the ergometer. The coach actually has to think now, putting together the best lineup for the fastest boat, rather than writing Excel tables for tabulating erg scores. In short, rowing adds the “art” that has been lacking through the long winter.

But seat racing means so much, out-weighing most erg scores and other testing numbers collected during the winter, that oarsmen approach “selection week” with dread. Suddenly, one or two short pieces in an unfamiliar lineup mean the difference between first and second varsity seats.

I won’t get into the reasons for seat racing here. I believe it’s the best method for selection of a fast lineup, followed closely by lots of work in pairs. And there are no inside secrets that could help me seat race myself into the American Olympic eight. The training that an athlete brings to the water after the winter heavily influences the outcome of seat racing, and the results from the winter do influence the direct athlete vs. athlete comparisons that a coach looks at.

So, what can I offer here?

Mainly, the mental approach the athlete brings to seat racing day can make a significant difference in how that athlete performs. To bring your best during a seat race and have the opportunity to win, here’s Coach Jay’s advice for winning seat races.

How to win a seat race

First, for everyone on the team, “RACE DAY RULES APPLY”. That means everyone needs a full night of sleep, good hydration and dietary preparation and good health. If any member of the team is deficient in these areas, they should notify the coach before seat racing starts. This is the “First law of successful seat racing”. Because, even if you weren’t raced that practice, but tell the coach that you were racing on 2 hours of sleep afterwards, the coach now gets to throw out all the results he just got, and repeat the whole sequence later. Thanks for wasting that practice. (Now go do a 6k. Grrrrr.) Furthermore, Race Day also means that you have to get your mental “game face” on and face down your nervousness.

Being seat raced is an opportunity for the athlete to be the coach’s complete focus for one, two or even 5 entire racing pieces. As an athlete, you will not get this much attention during a typical practice. It’s your opportunity to shine.

It’s also your opportunity to prove the coach wrong. That strange little hitch in your shoulder at the catch? The technical problem that you’ve been yelled at about for the entire season? Well, it doesn’t matter all that much when you win your seat race, does it? Prove the coach wrong; prove you deserve a seat in the next boat up. Prove that you’re the Alpha Wolf.

So, what is the coach looking for during seat racing?

Other than the obvious results between two athletes?

I would also look at the stroke seats, if I wasn’t sure who would be stroking the various boats. I want to see how well they’re keeping the required rating and how easily the boat behind them follows.

The athletes that are being raced are obviously the center of my concentration. I’m looking for how well they row when under pressure and how they mentally strong they are. Are they looking over? Are they shouting in the boat? Did they give up when their boat got too far down or ease off the pressure when they got too far up? Lots of questions about how the athlete attacks seat racing will directly translate to how that rower will approach real competition. Be aggressive, but mentally strong. This is the

Seat racing (if the coach has done his lineups correctly) is the closest racing that will happen in practice. For many crews, this is the only opportunity to experience competition before they are putting their uniforms on for the real thing. Will the technique that endless miles in the tanks, on the ergs and on the water fall completely apart when *real* full pressure is required?

Thus, please don’t suddenly change your approach to rowing when a seat racing day gets started. That would be the easiest way to lose the race and drive the coach insane. (I know, short drive.) This is the “Third law of successful seat racing”.

Next, try to meld in to the rhythm of the boat that you are in. The easiest way to win a seat race is to switch into the boat that won the previous race and “get out of the way”. Don’t try to win the race by yourself; this is a team sport, after all and the athlete that adds to the swing of a successful boat will have an advantage. Because of this, time spent on the paddle with your new boat, or even a power ten is key. Make your switch as quickly as you can, get adjusted and go. Those warm-up strokes give the athlete the opportunity to learn the rhythm of their new boat, either helping a struggling boat or meshing into the good swing of a successful boat. Thus, the “Fourth law of successful seat racing” is to switch quickly and get a few warm up strokes.

So, when the practice is over, the athlete must now face the results. Either you won or lost. Was is close? If so, expect that race to be “looked at” again by the coaching staff. We like “definitive” wins; that means we can be reasonably certain about that outcome. Close races leave the coach shaking his head. Now he’s looking at just making a “gut call:” who is better when a seat race basically ties (dead heat)? Good luck with that one, it keeps us up at night.

And for those on the “sideline” not being raced: If you don’t think that we’re watching the entire boat, you gravely underestimate your coach. Yes, we’re concentrating on two rowers, but the quickest way for me to throw out my seat race plan and make a “surprise bow vs three” switch is if I believe somebody isn’t giving their best effort, or worse, is trying to throw the results.

We’re all on the same team, people.

And that is the final lesson of seat racing.

Get students to study rowing videos

Posted on October 15, 2015October 20, 2020 by Rebecca Caroe
A Rowperfect reader showed us this email he sent to his high school rowing squads. Here is an… read more

Posted on September 10, 2017October 14, 2020 by Rebecca Caroe
A guest post by David Harralson. I was reading an article by Ed McNeely recently (https://peakcentre.wordpress.com/2009/01/20/peak-power-the-limiting-factor-to-rowing-performance/)  who proposed… read more 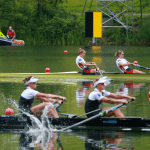 Coaching a long stroke in rowing