FOOT FORCE is an expression of how well your feet transfer the force of the hip and leg muscle structures onto the stretcher. Applied the right way it can get you the missing second to win the race*

This is a strong statement. Gate force is a common currency among rower’s, coaches and sports scientists when valuing the output of the rower. For the past few years Bat Logic – our shoe -quick release supplier has been looking at foot force and how it contributes to the overall force that a rower can produce on the gate and, most importantly, how improvements to foot force can convert into boat speed gains. Read what their R/D found out.

Foot force is not a measure of how powerful your feet are, rather it is an expression of how well they transfer the force of the hip and leg muscle structures onto the stretcher. During the drive, a rower creates strong, forceful movements from hip and knee extension, which are transferred to the stretcher via the ankles and feet and then through to the handle by the upper body and arms.

Foot force to get a powerful drive

Foot force is by nature dependent and expressive of the load on the blades. Without holding a loaded handle (in the water or with the chain force of an ergo), foot force is minimal. As such foot force cannot be considered as an individual segment of the stroke, rather it is an expression of the body as an ‘energy transfer link’ between the handle and stretcher.

Therefore a more stable foot demonstrates more force simply because of its improved ability to transfer leg and body force to the stretcher. In general physics terms it is also seen that when applying a pushing load, greater surface area at contact is also helpful. This will lead to an obvious increase in efficiency of energy transfer. If the rower is able to transfer more force between the stretcher and handle, when used correctly (blade in the water, accurate and well timed arm draw), that force will convert to boat speed.

If you observe the graph above, you will notice the distinct relationship between heel timing and peak force. This is when the heel makes contact with the foot board. As this contact occurs, the structure of the foot becomes a platform rather than a hinge, allowing a more efficient transfer of energy to the stretcher (and back again). A stiffer lever will always transfer energy better than an unstable one – in this case your foot. In the graph above we show an athlete utilizing BAT Logic equipment with a custom setup aimed at increasing heel loading. 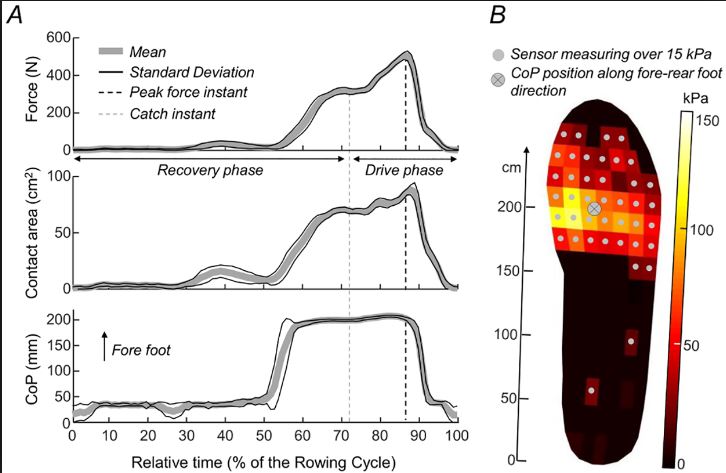 A sprinter is very strong on their toes when applying force and converting it to power, so why is rowing so different? A sprinter is different as they are transferring force onto the track in a plantar flexed position (toes pointed down) at their first contact with the ground – their ‘catch’ position if you like, which takes the talo-crural joint (ankle) into a more stable position for the biomechanics of running. The sprinter is also upright, with a straighter lower limb and a centre of gravity above and slightly in front of them.

The goal with sprinting is to produce maximal force in a downward and backward direction literally propelling the athlete up the track. Contrast this to the rower at the catch- on their toes with a dorsi flexed (toes pointing up) and less dynamic ankle position, fully flexed knee and hip plus with the centre of gravity over their seat. Their goal is to transfer as much foot force as possible horizontally onto the plate and then through the blade. This is a very different environment for the foot to transfer force.

This figure above shows the pressure distribution of an elite rowers on an erg machine. It shoes the importance f the front part of the shoe.

Foot Force during the Catch

In the catch position, the tibia (shin) is vertical or near to, with a loading mechanism that results in an internal rotation of the bone (twisting in) and a resulting lowering of the foot arch arch as the heel falls to contact the stretcher late in the drive. An athlete will generate a “peak foot force” but it may not be equal or even close to what the potential force generation from the hip and knee were in the drive movement. In other words, due to the foot position, efficiency is often low and the effective foot force is reduced because of this.

Contrast this with a position where the rower’s heel is fully engaged and their foot is supported and stable. This allows a larger base of support for the rower to load against. This stability not only enhances the foot and ankle’s ability as a transfer lever, but also creates a broader base for the athlete to hold against, making it easier and more comfortable to suspend their body weight from the seat during the early drive. Efficiency is improved, comfort is greater, muscles are working better (especially the power generating glutes and hamstrings) and foot force is increased. This is good for the athlete’s position, for force generation and, the absolute key, for boat speed.

Speed can come from an increase in your foot force without necessarily trying to row any harder and as a result you will end up going faster. Get your faster system in our shop

A doctor of Osteopathy with a Masters in lower limb biomechanics and a passion for what makes people perform at their best, injury free. Ed is expert on Sports Medicine, Athlete analysis and Product Innovation. He has worked with numerous Olympic teams as well as top colleges and schools internationally, he is also a contributor to international rowing publications and conferences.

Posted on November 13, 2008October 22, 2020 by Rebecca Caroe
These new sculling oar designs were announced at the FISA Coaches Conference in Paris, November 6-8. The Dreher… read more 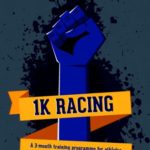 Posted on March 25, 2019October 13, 2020 by Rebecca Caroe
We know winter isn’t over yet – but many masters rowers will be starting to look forward to… read more