A guest post by David Harralson from Casitas Rowing, USA.  David was most vocal in his follow up to Carlos Dinares’ original post How can I train better for rowing?

Carlos does not mention one of the most important uses of the RP3, that of one legged rowing. Get on the RP3 and take one leg out and attempt (yes, attempt) to row. Once you can do this, look at the force curve on the display and practice until the one legged force curve is like your two legged force curve. Switch legs and do the same thing. Practice with either leg aiming for the same 500 meter split times for decent distances. Many rowers inadvertently have different pressure on each foot, and this screws up the balance of the boat. Often, this is due to the small differences in leg length that all humans have, but it can be corrected with proper orthotics. I have nerve damage from chemotherapy that screws up my balance, so this is more difficult for me.

But, in other aspects, the RP3 is not that similar to rowing/sculling. Consider, the RP3 has a centrally located handle, gripped equally with both closely spaced hands. This is not close to the feeling in a boat. If you are a sculler, both hands operate independently over a wide arc. Both hands have independent force profiles in both the vertical and horizontal planes in order to make the boat go straight and smoothly, pull, feather, and recover. The situation is analogously the same in a sweep boat. The hands sweep through a wide arc with substantial lateral movement, but the body must remain in the same fore and aft plane during the stroke. The load on the hands is different, both on average and dynamically changing during the stroke.

For consistency, yes, you can row at the same ergs or pace on the RP3. On the water, I use the Crewnerd app (or you can use a GPS enabled StrokeCoach) and achieve the same results. For aerobic conditioning, the erg is superior, since it is difficult to get a continuous row of 15, 30, or more minutes while it is easy on the erg. And the Crewnerd app allows me to see how smoothly I am rowing in both the stroke and recovery. The erg does not show how efficient you are on the recovery.

For developing power, the erg does not have a high enough drag factor to be useful. The athlete needs to use fixed weights at 10, 5, and 1 rep to develop strength and power, then use the erg at high drag factors over 1, 5 strokes, 100 meters through 500 meters. then on the water row in pairs, in fours by pairs and fours, in eights by pairs, fours, sixes, and eights to get the range of drag factors, with the benefit that the rower is experiencing the forces on the water, not an artificial simulation.

Evaluating changes in rigging is not feasible on the RP3. For our high school varsity eight, it is rigged stern side port for seats 1-6 and stern side starboard for seats 7 and 8. There are different spreads at different seat positions, and different oar lengths for different rowers. For the pair, we can make most adjustments rather quickly, changing rigger position, spans, and oars and oar lengths at the dock and changing shim heights, number of clams, and stretcher position on the water. Try any of these on the erg.

As far as the RP3 protecting the rower from injury, this is a red herring. I have seen rowers complain about getting injured from using the wrong blades (different blades load up differently) or just putting in or taking out the boat and this just means the athlete is not trained properly. Get them on a proper strength program including heavy dead lifts and the problem resolves itself. (My coach looked concerned when after practice I took a 395 lb dead lift at a bw of 159 lbs and 72 years old, But I have never been injured)

Using the erg to practice low drag factor high rate rowing is not very effective. I can get well over 50 SPM at the highest drag factor and very rarely rate over 40 on the water. It is much more effective to get efficient rowing between pairs and more at slightly over race or sprint pace as this translates directly to race performance. To look at on water force curves, get Smart Oars. You are being very hopeful that the force curve you see on the erg is the force curve you actually produce on the water.

Yes, by all means use the erg (and weights) during the winter or rainy season. You keep a strength and fitness base that allows you to go directly to on water training when conditions improve.

And use the erg to get a completely new rower familiar with the fundamentals of rowing before putting them out on the water for their bath.

One thought on “How can I train better for rowing? Part 2”

I need a crew training diary

Posted on October 8, 2014October 16, 2020 by Rebecca Caroe
We got sent this question from a Hong Kong dragon boat club – but the issue applies to… read more 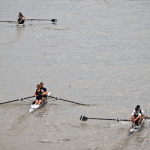 Posted on October 11, 2018October 14, 2020 by Rebecca Caroe
Head racing requires totally different tactics from side by side.  Mostly because the clock is a different motivator… read more