A guest post by Mike Sullivan, author of Handling your Sculling Boat and Sculling  Safety Manual.

As I took the train up to the city last night to have dinner with Charles Carroll and Nick Seuss, my written rant played over in my head and helped galvanize rough ideas I’ve had over the years.

Britain’s wildly successful elite rowing program is funded through the lottery, and as I understand this is likely to dissipate in 2013, I think causing great damage to the Brit effort. Many countries give gov’t support to their Olympic rowing effort, and many get a lot of corporate help.

In the US in the past, we’ve had some fairly decent corporate support, enough to fund the camps, coaching, equipment and an almost- reasonable stipend.

I’d like to see a model for elite rowing where it is funded by the rest of rowing, particularly the exploding population of Masters’ rowers.

There is an intrinsic value to the very best athletes trying to make space age shells go as fast as they possibly can. It advances the sport, advances technique, training methods, and technology.  Those masters rowers who are learning from a coach how to catch well, are learning it because elite athletes did it first, men and women who tried everything they could to make their boat go as fast as they could.

I’m very much opposed to US gov’t support of elite rowing. I welcome Corporate sponsorship, but believe it should be a supplement to basic funding, as I worry that corporate sponsorship is driven by marketing potential, and overwhelming reliance on that sponsorship can create conflicts, where the marketing desires of those sponsors don’t match the competitive needs of the sport.

The mechanism of how the user community in US rowing can raise tens of millions to support the Olympic efforts of men and women, heavies and lights is lost to me. I imagine an evangelical fund raising effort could produce short term results, but US Rowing organizations haven’t garnered the track record and confidence where people might willingly bump org dues and individual dues way up in order to dramatically increase the budget for Elite rowing.

I guess I’m saying: This is what I want. How do I get it? 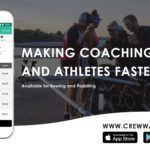 Posted on August 31, 2018October 15, 2020 by Rebecca Caroe
Crew Watch is an app made by rowers for rowers that aims to solve many of the common… read more

Posted on August 12, 2011October 23, 2020 by Spring
Guest Post Series from Atlantic Race competitor, Tom Dignum This is a new blog series for Rowperfect from… read more