Reading University Boat Club first borrowed and then bought a Coxmate SC.  Their Captain, Simon Barbour, wrote this about their trial.

There was some money in our budget for a new cox amplifier this year, and with the knowledge that we would be focusing on an eight for Henley from early on in the season, we decided to look into getting a device that the cox could use to gain feedback on speed from, and use to help improve the boat. Research narrowed down our options to three different equipment packages we could look at. The first was The Coxmate SC, with a mounting system and Impeller (rrp £545+£147 for the kit and impeller, however at the time of writing due to a sale we got the whole lot for £597). Our second option was an NK Cox Box (the cox vox was an option, but we needed an amplifier that could be swapped between boats and still provide a rate readout), Speedcoach Gold and a PC interface (we needed PC upload features for data analysis) – total package price £605. Our final option was similar to option 2, but using Rowdata’s cox box, which retails at the same price as the Cox Box.

Immediately, the Coxmate SC seemed the most suitable for our needs, with inbuilt PC interface and software, and a more extensive display than the Speedcoach that included Cover, and Speed Ratio, as well as the standard speed measurements. I made contact with Rebecca Caroe at Coxmate UK, and she was very helpful, even loaning us a unit with wiring kit to test for two weeks for free. As a University student, something for nothing is always greatly appreciated, so I took her up on her offer.

A day or two later, the Coxmate arrived – Rebecca had charged us nothing for delivery which was very impressive, as the Coxmate arrived in its own carry case, a sturdy blue plastic box, with foam compartments that keep the unit, microphone and all other features safe, and enables easy transport to regattas.

We used the Coxmate to start with just like a standard cox box for a week or so – it was just before the Fours Head, so we were out in the boats we were doing for that. It worked very well, the connections held up fine against being transferred from boat to boat, and voice transmission was clear and crisp, with no crackles or hisses. It is worth pointing out at this point that it is fully compatible with existing NK wiring, so no changes needed to be made to any of our boats. The microphone came with a headband that was adjustable with Velcro rather than elastic, and was, according to our coxes, very comfortable.

Following a successful run down the Tideway with our club’s S3 4+, we decided to mount the impeller, and test out the box’s ability for giving data readouts. This was where we met our first obstacle, which itself was not the fault of the box or the equipment. In order to give accurate readouts, particularly of Speed Ratio, the impeller needs to be mounted within 2 metres of the bow of the boat. However, our Empacher K85 8 is sealed from 3 metres in, so we had to mount it there. The kit was easy to install, however, and the wire was just the right length, accommodating our boat’s 6-seat split without any problem.

Having mounted the kit, we looked ready to go. Then, disaster struck. We had left the Coxmate in the Cox’s seat, and none of us thought to take it out before lifting the boat to heads. An inevitable meeting of Coxmate and Floor followed, accompanied by much swearing. The drop was perhaps 7 or 8 feet, and had led to a whole row of pixels on being knocked out, and upon plugging the box in, we realised it must have broken an audio connection as the cox’s voice would only come out very faintly, even on full volume.

I very sheepishly emailed Rebecca, explaining that we were still really interested in the product, and would happily pay for whatever repairs were necessary. She would hear nothing of it however, and took it back, repaired it for free, and had it back to us really quickly – from dropping the unit to getting it back repaired was a only a week. This was fantastic service beyond what I would consider the line of duty, and gave me great confidence that if we were to go ahead and invest in the product, we would not have to worry if there were any malfunctions.

With the unit carefully carried down to the water, we were now ready to test it out with its full capabilities running, and it certainly did not disappoint. It took our cox a while to get to grips with working it, naturally with so many more features than the NK Box, it was not immediately as clear how to work it, but she picked it up in time. Furthermore, the real time feedback on our performance was really useful to us as a crew. Our cox quickly adapted the information she was receiving into her calls, so we would get things such as “Cover’s at 16.5 (metres), let’s accelerate the finishes and get that out to 17”, or “Speed’s at 6.3 (m/s), I want a 10 stroke push to bring that up”. Having the feedback facing the cox, rather than the stroke man, as we had previously had when using Speedcoaches, allowed us to make much better use of the data.

Off the water, the PC data analysis programme was really useful – by comparing data from pieces done by the first and second eights, we could get direct comparisons between the two of them. The data is taken so regularly that you can break down the different areas of the stroke – for example the seconds were losing speed to the firsts around the front end; so we knew that was an area that needed work on with them. Only having the one unit, we had to get the boats out at different times doing the same pieces to do comparisons, but we would definitely look into getting a second Coxmate if the money becomes available, for true side-by-side analysis. It is worth pointing out that we used the Coxmate for relative analysis between outings, and due to us mounting the impeller further back than it should have been, its readouts may not have been correct – we supposedly reached 7m/s in some pieces, which we calculated would have got us through 2k in under world record time! However, like the Speedcoach, it can easily be calibrated if you have a fixed length piece of water you can paddle over – we may well do this on training camp this year, but for relative analysis from outing to outing the fact that all the units may be not be fully accurate does not really make much difference.

We were very pleased with the Coxmate, and more than happy to pay Rebecca for the unit once our trial came to an end. One further thing I should note is that the unit comes with an interface and a cable for attaching a 2-way radio to it, so that coaches can communicate directly with the crew using it. We don’t have any radios, so couldn’t test this feature, however it seems a very useful addition, particularly if your coach is very quiet (rare, but possible!), or you club doesn’t have fantastic megaphones.

Overall, I would highly recommend a Coxmate SC to anyone who wants to gain real time feedback on their crew’s performance, it contains more features than any of the competition, and is definitely worth the financial outlay compared to a standard Cox Box.

See a review of the Coxmate SCT here (bottom of page)

Peter Hodson talks about the accuracy of GPS

Posted on February 18, 2011October 22, 2020 by Mohit Gianchandani
Incorporating GPS into Coxmate products was a big project for us last year. Even today, the technology continues… read more 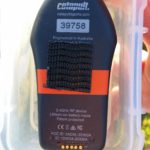 Posted on May 22, 2017October 14, 2020 by Rebecca Caroe
Using GPS for boat speed has limitations.  One of the main ones is the speed the unit updates… read more

Posted on October 12, 2016October 20, 2020 by Rebecca Caroe
What is a preferred angle for mounting the Coxmate GPS GPS in the Boat I’m about 6ft 5in tall… read more