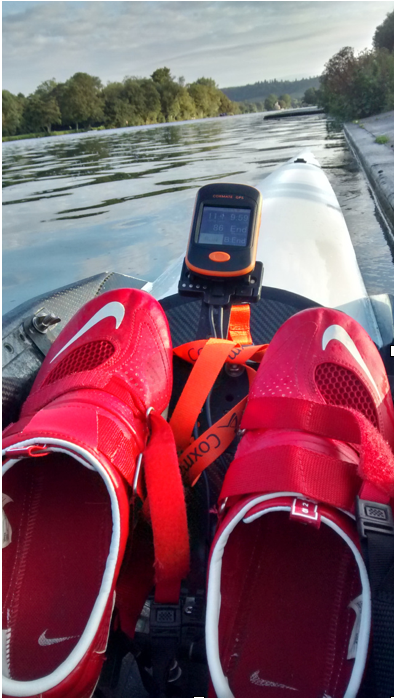 GPS in the Boat

anniversary by releasing an interesting new product in the Coxmate GPS, a ratemeter that can also measure your speed using a GPS sensor, in a similar way to the NK Speedcoach GPS and also the new CoxOrbfrom Activetools, but priced at a significantly lower price bracket than those options.

Coxmate were kind enough to send me a GPS unit for an extended testing session so I have been able to get a feel for it over the last month and compare it to the NK GPS 2.0 that I already own to get a feel for all the positives and negatives about it, so let’s dive in and see what it’s like

The Coxmate GPS comes in quite a neat box 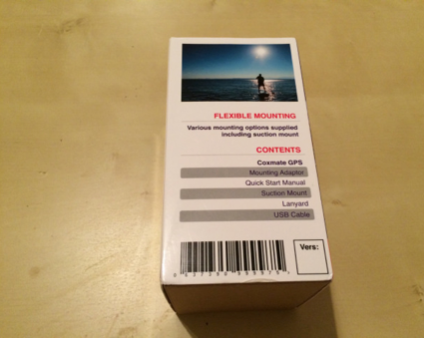 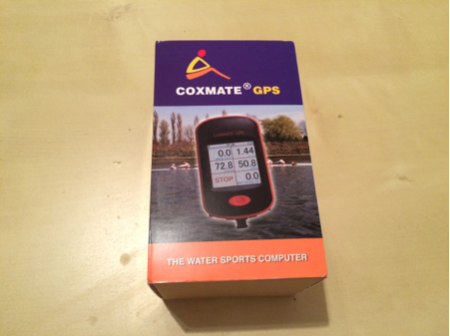 Inside the box, you have the Coxmate GPS, manual, lanyard, mount and three mounting options (NOTE: DEFINITELY familiarise yourself with the manual, especially if you are used to using an NK as there’s a number of features you would otherwise miss, as I did originally! An electronic version can be found here

Focussing on the mounts, it is good to see that Coxmate has given you several options for 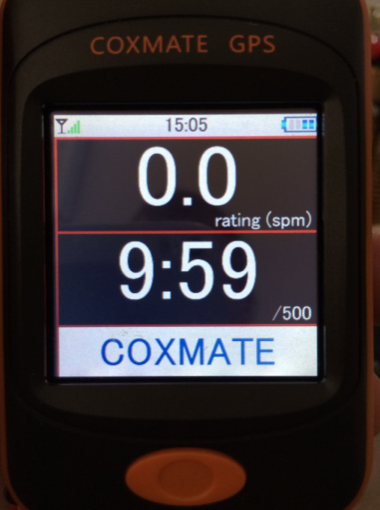 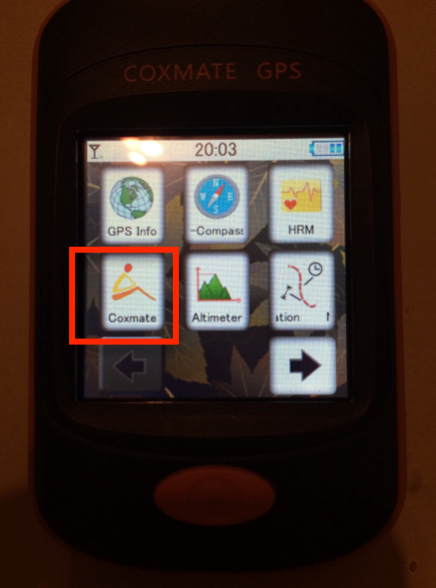 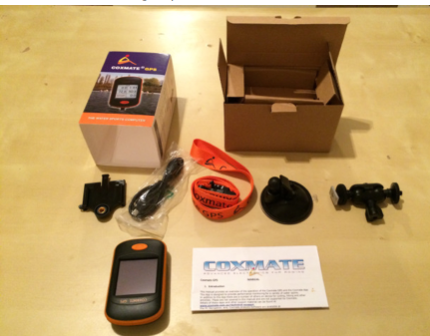 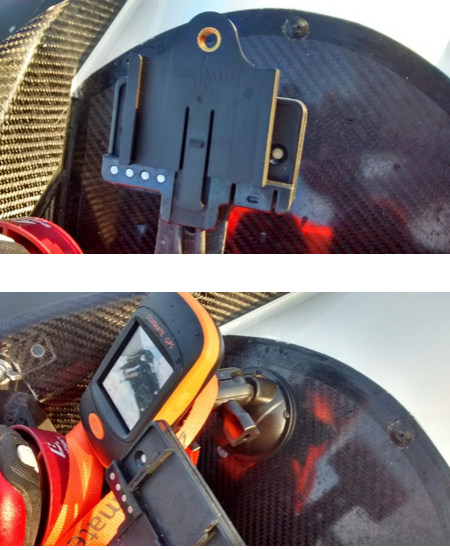 mounting the GPS so you can find the one that suits you the best without having to buy extra parts. The first option is the mount itself which fits the standard NK strokecoach mount, so you can use it with an existing NK mount in your boat as shown below

Focusing in detail on the Coxmate GPS, the general shape and style reminds me of a Bike GPS/computer, which is a fair comparison as I understand it is essentially a bike computer that has had the Coxmate software installed on it! The unit has a 2″ colour touchscreen, which feels like it is plastic rather than glass as you would have on modern smartphones, although that is a plus as the screen is responsive when using gloves which smartphones generally aren’t (a restive touchscreen rather than a captivate one). The unit itself is in a hard plastic case with a “grippy” orange rubber surround that makes it easy to hold. 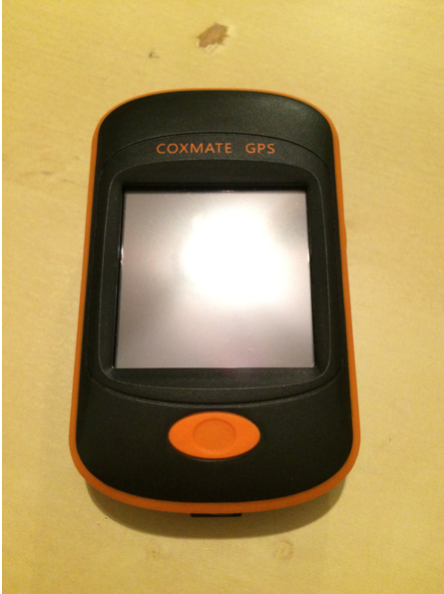 In the hand the unit feels very solid and has a good weight to it, and tends to give the feel of a device that is quite robust. 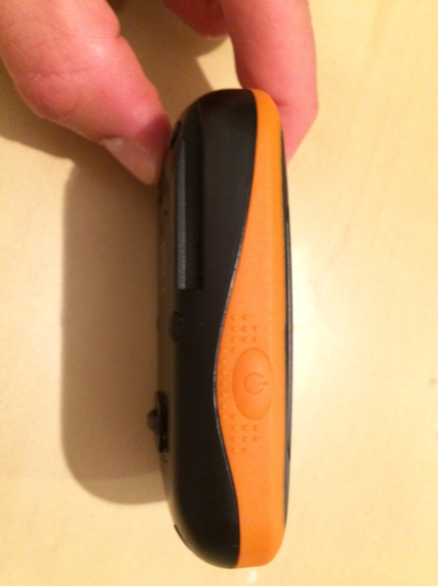 Looking around the edges of the unit there is a chunky power button that you use to turn on and off the unit (with a long press), and a flap on the bottom of the unit that opens to show a USB mini port for charging and PC sync, and also a headphone socket. The last button is on the front of the unit and acts as a “menu button”. 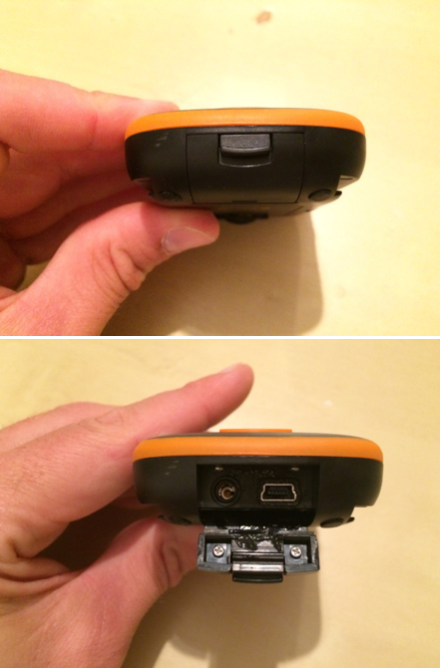 It is worth noting however that although there are a lot of apps, there’ s only one specific for rowing, and the only one that is supported by Coxmate, which is the Coxmate app, so that’s where you’ll be spending all of your time with this device.

The Coxmate app can display speed/stroke/ rate/time/distance/distance per stroke and heart rate (with a separate strap), you can set workouts to follow and you can even race against a boat, or even have it show a course for you to follow that you have set up in the of software already.

Using the app is pretty simple, you select the app which will load and then you see the following screen which is the standard workout screen, showing only rate and speed. If you row now it will show the information to you but will not record anything

There are several screen setups that you can have within the app to present the information on your rowing however you like, and you can scroll through these options for showing data as outlined in the manual and in the picture below

You scroll through the options by pressing the button on the front. First the 2+2 screen as shown below. As before it will show details as you row, however if you want to record your outing for future review you need to press the screen 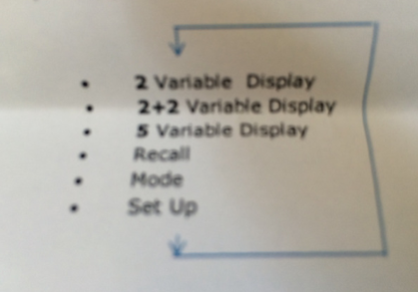 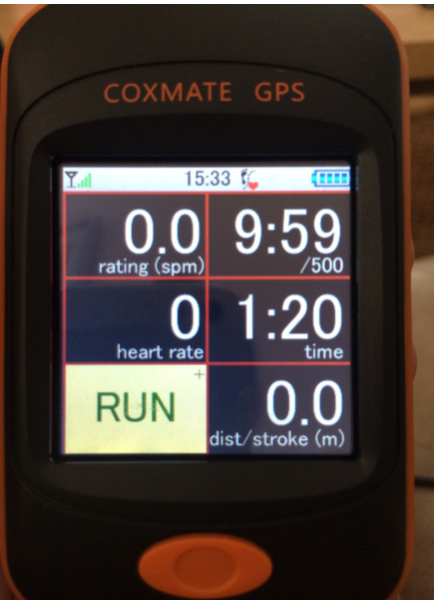 If you press the front button again it switches to the 5 variable display which fits in rate, split, heart rate and then also details of the workout you have set up Another front button press and you get to the recall page to review the workouts

Another button press and you go to the mode screen which allows you to have either “just row” option (i.e no workouts) or you can select one of your programmed workouts. It’s here you can also select any routes you have programmed in from the PC software

One final more press of the front button and you are in the settings where you can change seemingly everything how the device works, from units displayed through to sensitivity of GPS and even the screen colour so it’s either white on black or black on white (I prefer black on white)

The Coxmate GPS can also display and record your Heart Rate, however note that it doesn’t support Bluetooth Smart or Polar analogue, but instead supports ANT+, which means either garmin HR or wahoo HR belts are the way to go for picking up heart rate, the advantage of this is that it doesn’t need “pairing” as bluetooth smart does, it automagically picks up the ANT+ broadcast and displays your HR 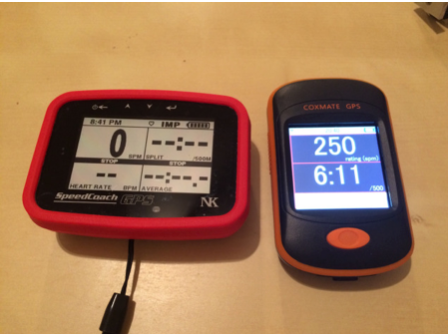 As a small GPS unit for rowing that can be used by coxless boats, currently the only main competition to the Coxmate GPS is the Nielsen Kellerman GPS 2.0, so I felt it was a good product to compare the Coxmate to. Externally you can see both units are pretty similar sizes, but due to the vertical layout of the Coxmate compared to the horizontal layout of the NK means the units on the NK screen are somewhat larger. In use however this didn’t seem to affect the general usability of the unit, as I found both the 2+2 unit display and the 5+2 unit display to be quite easy to view when in the boat.

Comparing the screens, the Coxmate GPS is colour, has a considerably brighter screen which is also a restive touchscreen, so will work with gloves on, but feels like it is plastic so has the potential to get scratched more than the glass screen on the NK would. When using the units at the same time I found that generally the Coxmate was better than the NK at night when the added brightness meant that the screen was very bright and clear, but during the day I found that the NK to be slightly easier to read as the extra contrast and seemingly less reflective screen meant that it was clearer than the Coxmate GPS. Both are significant improvements on using a mobile screen in the sun however.

With the GPS speed, I don’t have the specifics of the chips each has used but from testing both side by side I suspect the NK has a slightly faster GPS chip as it seemed to pick up changes in speed quicker than the Coxmate, that being said the Coxmate was by no means slow and over pieces they would both match up on average speed so I had no issue with the speeds reported.

Battery life I find I can get around 5-6 hours out of the NK, whereas it’s probably closer to 4-5 with the Coxmate meaning both have plenty of juice to get through a couple of outings before needing a recharge, and the use of a mini USB cable means it’s easy and cheap to have several charging cables around to boost up the power on the Coxmate GPS whenever needed

Price wise the Coxmate has DEFINITELY got NK beat – the NK GPS is currently priced at £359 plus deliverywhereas the Coxmate GPS can be picked up for as little as £150 plus delivery, less than half the price

All in all though these are very minor issues however, the reliability of the product has been 100% and most of the little foibles I’ve found are things I’d probably get used to over time.

Generally I’ve been very impressed with the Coxmate GPS, although the NK tends to be of a higher quality, I hesitate to say that quality is worth the extra £150, particularly since reliability wise I have had no issue with the Coxmate when using it with the only drawback to using the Coxmate being its lack of support for speed measurements using an impeller, so if you don’t have the need for an impeller then I’d recommend taking a serious look at the Coxmate GPS.

One thought on “Coxmate GPS Review by Tom Carter”

Head of the River Race report

Posted on May 8, 2009October 22, 2020 by Rebecca Caroe
HORR over done and dusted in March – but it takes until May for the race reports to… read more

Great8 Trivia Quiz – the Answers and the Winners

Posted on March 24, 2009October 22, 2020 by Rebecca Caroe
Thanks to everyone who entered the Great8 Trivia Quiz… apart from a shockingly knowledgable man called Monkey TSS… read more