The mass of disruption and upsets at 2016 Henley Royal Regatta’s final day shows how much is at stake in a top rowing race. 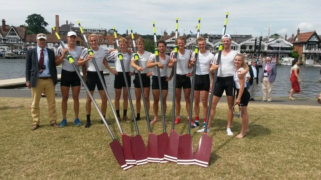 Nereus at a happier moment early in HRR 2016

Disqualifications, steering upsets and champions overturned by upstarts – all goes to show that you can’t say “rowing is boring to watch”.

There are two ways to steer Henley – one is with a coxswain.  First up, it’s clear that many crews did not have confident coxswains who could steer a straight course down Henley’s famous booms.  The overhead cameras used in the HRR YouTube videos show up every tiny deviation.

If you are not regularly racing at Henley, get to know the course, the river and take advice from experts who have done it before – the How to Steer Henley book is a great resource written by experienced coxswains.

It’s often said that a good cox cannot win you the race but they can surely lose it for you.  Nereus know this to their cost.

This one came from not the cox, but the coach.

Nereus was the fastest crew of the Ladies’ Challenge Plate, but got DQ’d. Not because of obstructing the other crew, but an instruction from coach Diederik Simon – the reason given was “unsportsmanlike conduct”.  [thanks to NLRoei for the link and Reddit/Rowing for the translation].

Whether you agree with the Stewards’ decision or not, it is clear that not knowing the rules of racing is not an acceptable excuse.

Plus, I am sure that the expert video recording is now beginning to act a bit like a “Third Umpire” in field sports – a reference for after the fact to see what really happened in slow motion.  Is this the right way to go for rowing umpires? 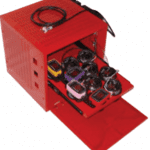 Posted on October 25, 2016October 16, 2020 by Rebecca Caroe
We just made three of these for Cambridge colleges. A working demonstration of theCoxing Security Box – custom… read more

Posted on September 29, 2014October 21, 2020 by Rebecca Caroe
We got a message from the clever folks at Shoothill who have created a river gauge level map… read more