Leading the charge to get online are races hosted in the USA with the Head of the Charles Regatta being first off (@hocr). Predictably the messages are mostly about regatta organisation and links to their website and results.

ScullersHead
seems to be the only major UK race around thats live and it had full results from the race last yearand so can really be considered a leading adopter of the genre. Great photo of the head trophy for their icon.

Head of the Hooch (@headofthehooch) looks like it only just got online this year for its event yet the Cochrane Cup (@cochranecup) has full results details as they happened on May 2nd.

Rowing Clubs are also coming onstream and the first we found was London Rowing Club (@londonrc). Sadly for British readers, its London Ontario – guess the Tideway lot will have to find a different online name for themselves when they catch up. Austin Rowing Club in Texas are very active (@austinrowing) Vesper Boat Club (@vesperboatclub) in Philly uses the site to publish navigation advice and promote its beginners courses.

From the UK side

LYRowing London Youth Rowing
and Vesta RC (@vestarowing) in London are pretty organised. Not only do Vesta have Twitter they organised a club photo on Twitter and also have a Flickr account to show off the club photographs! 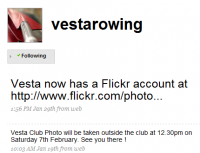 Kingston Royals Dragon Boaters (@kingstonroyals) are online as is the Open Water Rowing Club (@owsc) in Sausalito. They scull in San Francisco Bay and I was lucky enough to interview David Low and do some outings with them last summer – truly intrepid folk!

In case you missed it –

Posted on August 3, 2015October 21, 2020 by Rebecca Caroe
From now until the start of the 2015 World Rowing Championships on August 30, purchase a Canada Compression Sock*,… read more

Posted on October 21, 2009October 21, 2020 by Rebecca Caroe
Were doing a turn-out and have found a couple of books that are no longer needed. If you… read more