The opportunity for mathematicians and rowers to collaborate is not a frequent occurrence.  Yet the rollout of the new UK points system continues and the results of the Scullers Head were the first big event – Richard Phillips on Facebook wrote this observation.

Nearly a month has gone by since the Scullers head and this should have been sufficient time for those allocating Ranking Index Points to have worked out how they are going to do this in a fair, logical and transparent manner.

It would give the new system much more credibility if the points allocations could be published from this event.

There are still a large number of coaches and athletes who, partly out of ignorance as to the system works in detail, do not have any confidence that it will produce the results that are being sought.

I have particular concern regarding the allocation of points at head races.

“Take a small boats head with a wide range of entries in single sculls.  Let us say that there are only 15 Open (senior) singles, The two local schools, and some of the clubs place mass entries in junior with competitors down to as young at J14 racing, adding a further 30 entries in singles. Then there are some masters , some of whom are in Masters “G” category. taking the total entry up to 60 single sculls.

There being more than 50 entries in single sculls the overall winner, according to the charts published at the beginning of 2017. would gain 145 ranking index points.

My question and concern is that ranking index points appear to  be awarded on the basis of the number of entries and not because you have beaten worthy and matched opponents. Should not the points awarded be based on a much narrower band than the total entry in the event?  For the few senior (open) level club oarsmen and women left in the sport it would seem that you could be gaining significant ranking index points for simply turning up.”

At regattas, Let us take an extreme example, HRR, a winner of the Thames Cup will have beaten 32 crews (+ the non-qualifiers) where as the winner of the Grand Challenge cup might only have beaten 4 crews. Does the TC winner get more ranking index points than the Grand?

One of the basic problems is that the “Elite” racing season for regattas only lasts 8 – 9 weeks, during which time the top athletes might only race four times. Many regattas now rely on Juniors and Masters to make them financially viable and will not bother offering events for high pointed senior athletes this gets worse at the end of June, once the Schools and universities stop sending crews to regattas.

Under the old system, when a regatta or head race issued its invitation for entries, it stated what events it was going to offer. With no “statuses” in the new system, how does an event advise athletes in advance whether an entry from them would be appropriate.

We have been repeatedly told that the system is still  being developed and that all will be well in April, when it comes into force. There are questions yet top be answered and April is not that long away.

A mathematician offers a solution 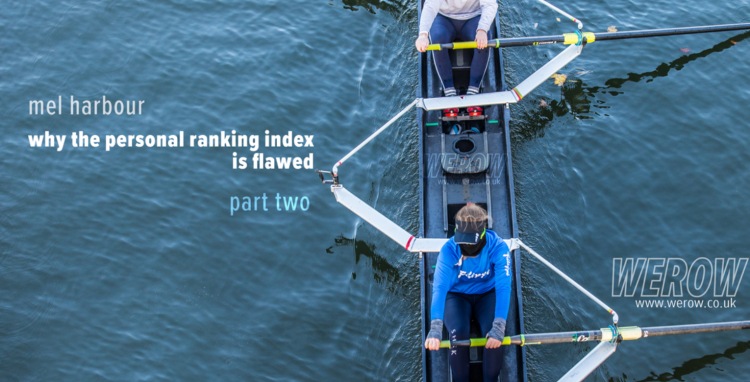 Mel Harbour (the mathematician I mentioned earlier) has both a robust diagnosis of why the BR system is flawed in his article Why the new British Rowing Personal Ranking Index is Flawed.

Based on the number of athletes you beat, not the quality of those athletes

I put the emphasis in deliberately, as this is the new system’s key feature, and the key reason why it’s broken.

To see why this is broken, let’s look at a simple example with two scenarios:

When the dust (splash?) has settled from these two races, we can easily see that the sculler in case 1 will be ranked far ahead of the sculler in case 2. Indeed, to the extent that it may be in practical terms impossible to overturn that difference in the points through future racing.

Helpfully, Mel has written a follow up article explaining why the Scullers Head results were so frustrating to Richard and other competitors.  He also suggests introducing the Elo system which has been used for ranking world Chess Players for some years – and gives some examples of how it could be made to work with crew boats too.

Get a beverage, it’s a long article!

Posted on July 25, 2018October 9, 2020 by Rebecca Caroe
If you find affordability an issue when buying RP3s, we are proud to offer you the opportunity for… read more

What can a case of beer do for your rowing training?

Posted on August 9, 2013October 22, 2020 by Tobi
Grab an ergo and a crate of beer for your next workout Control Most coaches of young rowers… read more 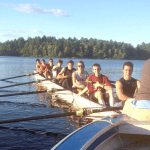 Teaching the swing for rowing stroke

Posted on February 8, 2018October 14, 2020 by Rebecca Caroe
In Marlene’s description of the sculling stroke she describes preferring applying the swing earlier in the stroke than… read more