The Rowperfect team has been working hard to get you some exclusive content and commentary about the forthcoming Olympic Regatta in Beijing .

We are adding new bloggers to our roster and so would like to introduce Richard Chambers – rowing for GB in the Mens Lightweight Coxless Four, Richard has been on our 'radar' for a while since his successful talk at the ARA Coaching conference last January. More detail on Richard plus an interview he gave the World Rowing website last month.

Richard's work will also be published on The Guardian Unlimited website – an official media partner of the British Olympic Association.

Duncan Holland will continue to give his expert commentary on the regatta, crews and how the race planning develops through the rounds of racing. A New Zealander by adoption, Duncan has coached in Switzerland and the Netherlands on their Olympic and World Championship programmes and will offer a coaches' perspective on the regatta.

We are also hoping to get occasional athlete commentary from Jen Goldsack (USA), Jochen Kühner (GER) and Rod Chisholm (AUS). Each representing different nations but some with connections to the UK!

Gearoid Towey updates us on the weather in Beijing

Posted on August 13, 2008October 23, 2020 by Rebecca Caroe
Gearoid Towey is writing for the Irish Times Rain and result fail to dampen spirits With the Olympics… read more

Rowing at the Olympics got rescheduled!

Posted on July 26, 2021July 26, 2021 by Patrick Biedermann
Two days of rowing at the Olympics got rescheduled due to severe weather conditions! Mondays and Tuesdays races… read more 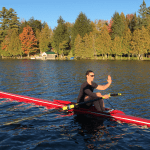 3 ways to improve your catch timing

Posted on October 9, 2018October 14, 2020 by Rebecca Caroe
Placing the oar in the water at the catch at the correct time is hard to do so… read more