We have just formed a mixed quad crew and want some advice on how to align our power and get the crew going well together.

The challenge for mixed crews is that men are usually stronger than women.  My view is to get the women to row up to the power level of men rather than a meet-in-the-middle compromise.

Where you will notice this difference is in the power phase of the rowing or sculling stroke.  Men will get the oar from placement in the water through to extraction at the end faster than women can.  What happens as a result is that women feel their power is “taken away” from them during the stroke – your oar may feel like it’s not gripping the water.  This can resemble rowing in a strong tailwind.

So the first part is for women to apply their leg drive more aggressively during the power phase – try to attack the first half of the drive with a confident press on the legs – much more than usual.

What men will feel is a bigger load on their legs (like doing weights in the boat) and what women feel is that the boat seems to move without them making much effort (much like being in a tailwind).  I call this taking the power away from you… when the power seems to have already started  and your push on the legs feels light rather than engaged and strong / powerful.

You will know you are being successful when the feeling of power “taken away” at the catch begins to recede and you feel that your work is adding to the boat speed.

Men, do not be tempted to cut your stroke short or less powerful.  Try to row normal length.

Depending on the relative height and strength of the crew, you may need to make some rig adjustments – shorter outboard on the oars for the women will lighten their gearing.  I recommend keeping the same inboard for the whole crew so you don’t have to adjust the pins on the riggers.

If you can adjust your foot stretchers so the blades are parallel at the catch and finish, that’s ideal.  If not – you will need to make compromises.   I prefer to get parallel at the catch and compromise at the finish – but that’s my choice.  You can do either.  My logic is that mixed crews can be fast and bigger faster boats are more catch-oriented in terms of power application.

My first recommendation is to do the Quarter Slide Push drill – this is short slide work built up from the catch working down the slide.

When doing the drill feathered blades (all four) beware a late square because you will miss the catch timing and that defeats the object of the exercise which is to get the blade placement timing and the leg power aligned at the catch.  So square early or learn to do it square blades.

Related Article – Aligning Force Curves for Junior 2x on RP3 this follows on from the on-water work described above.  It can help each athlete identify how their power builds up (legs, back, arms) and help the crew to get more synchronised by following a graphical force curve in real time.  Do this alongside the in-boat drills and you’ll be unstoppable!

Now for the video

This Crew is doing 6 drill and two sitting the boat.

A couple of points to note.  When using video to teach drills, I prefer to show ‘perfect’ technique.  However, this video is helpful because not every athlete does the drill correctly so you can see what NOT to do.

Go forth and practice some drills – let us know how you get on.

Posted on August 17, 2018May 20, 2021 by Tom Wall
Rowing camp in Varese, Italy: for advanced athletes and professional coaches One of the most prestigious rowing camp… read more 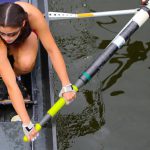 Posted on May 26, 2019October 15, 2020 by Rebecca Caroe
“I’m a new rower and I compete in school regattas. I was wondering what exercises I could do… read more

Try Magik Gates for a week for free!

Posted on January 19, 2007October 23, 2020 by Rebecca Caroe
Rowperfect UK has sets of Magik Oarlocks for Eights for you to try. As preparation for the Eights… read more