The World Rowing Rowing Federation (FISA) is pleased to announce that public nominations are now open for the 2013 World Rowing Awards.

This is a chance for the general public to have their say in who they believe had an outstanding performance in rowing in 2013 and who they would like nominate for the 2013 World Rowing Awards.

Nominations can be made in the following award categories:

One nomination can be submitted for each award category. 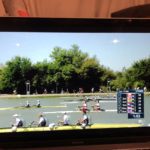 Posted on September 20, 2018October 15, 2020 by Rebecca Caroe
Did anyone else notice the really bad quality TV shots at the World Rowing Championships from Plovdiv, Bulgaria… read more