As rowers we know that often rowing mirrors reality – the camaraderie and joy, right 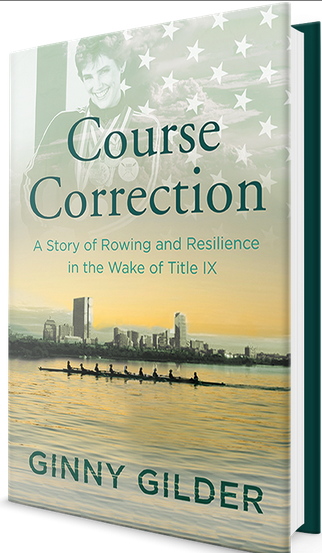 along with pain and heartache. In  Course Correction, Ginny Gilder’s debut book, she reminisces about the intersection of life and rowing – it’s not simply a story about an Olympic dream, but a memoir of the relationship between an athlete, her sport, and how rowing interjects itself into life and doesn’t let go.

Gilder was among the Yale women who stripped down in the office of the athletic director in 1976 to demand female facilities in the boathouse. She tells her story – why she was in that room that day, what brought her there, and how her life played out along with her many years of rowing that followed. Gilder went on to become an Olympian, founder and CEO of an investment business, and co-owner of the WNBA Seattle Storm in her years after Yale.

Gilder writes the book in four sections – Catch, Drive, Release and Recovery – beginning each of the four sections with an eloquently written description of that part of the stroke. She describes the body’s movement, the thoughts going through the mind of the oarswoman, the grimacing pain, the sounds of the water. Even for someone who often thinks about the rowing stroke, her descriptions are thought-provoking and the stories that follow the descriptive prose are both heart wrenching and inspiring.

Gilder’s story follows the movement of the stroke – the catch is where she finds rowing, leaves a broken home and dives in to her college experience; the drive concerns her years chasing the Olympic dream; the release explains her surrender to marriage; the recovery is where she finds herself.

Throughout the book, Gilder recounts her rowing career from the first time she saw rowing – at the Head Of The Charles when she was sixteen – to her time at Yale, and through to her National Team ambitions. Gilder sheds light on her experience of the 1980 Olympic boycott, her triumph at the 1984 LA Games, and life after rowing. Her successes and failures are palpable in her descriptions of the thrill connecting with a new doubles partner or the terror of her severe asthma.

In her personal story, Gilder tells of her struggles with sexuality, family relationships, fertility and marriage – each play a role in her story on the road to the Olympics, and on the winding path away from rowing. Her pain weaves into the story of rowing, there are moments where the sport defines her life and times life off the water dominates her story.

Perhaps Course Correction isn’t a light beach book, but it is a book you should pick up this summer. The history of women in rowing is a short one, only documented by a few people, and the stories of the first generation of Title IX are crucial to defining the future of women’s rowing.

Let me know if you buy it and read it.

I want to buy the History of Exeter Rowing Club

Posted on June 25, 2015October 21, 2020 by Rebecca Caroe
I wish to purchase the history of Exeter rowing club Thanks for your enquiry – we haven’t got… read more

Posted on June 7, 2017November 2, 2020 by Rebecca Caroe
Rowing Technique from a Holistic Perspective is a personal insight into whole-body rowing from an expert Alexander Rowing… read more

Posted on January 26, 2016October 23, 2020 by James Halpin
God on a Bicycle is the latest thriller book by Ian O’Malley, which tells the story of a young… read more