Even though the Watkins-Grainger duo was dominant in 2010 after winning the gold in W2x at the World Championships in New Zealand, all Anna could thing about is resuming her successful partnership with Katherine.

“I don’t really like racing against Katherine. I would much rather be racing with Katherine against the rest of the world,” said Anna . “It is easier when you really hate your opposition.  When you are racing international crews they are in the way of your Olympic medal,” she added.

On the mens side Andrew Triggs Hodge and Pete Reed won the men’s pair final overhauling the early final leaders Tom James and Alex Gregory placing them in  second. Veteran Olympian Greg Searle and Cameron Nichol finished third.  This could be interesting if the crew selection prioritisation is still pair; four; eight.  Greg could be into the second ranked sweep crew.

Hodge and Reed still believe that they deserve another shot at the kiwi rivals Hamish Bond and Eric Murray who pipped them at the World Championships 2010 by 0.32 seconds. “On this performance I think we have earned our place in the pair,” said Hodge “I want to be a world champion in this pair. The New Zealanders have been rivals for a long time. There is a bit of history there. I want to be the best pair in the world.”

How To Coach The Uncoachables 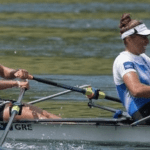 The finish in rowing technique

Posted on September 27, 2018October 15, 2020 by Rebecca Caroe
The finish is the final part of the drive where the rower draws the handle(s) in towards his… read more

How to step up from recreation to Masters competitive rowing

Posted on August 7, 2014October 21, 2020 by Rebecca Caroe
I am a female rower in her 30s who has been rowing for several years recreationally. I want… read more