Take 1: The Nationals ended as every regatta should:  with a total eclipse of the sun.

Actually, the eclipse was the day after. Sorry.

Take 2: The Nationals ended as every regatta should, with twenty rowers (and my girlfriend) stretched up and down a groaning board, swilling good beer and eating mediocre tavern food, talking about all the races we won and even something besides races.

It’s hard some mornings to picture that post-regatta glow. But there it was – the glow of exertion and light reflected by of 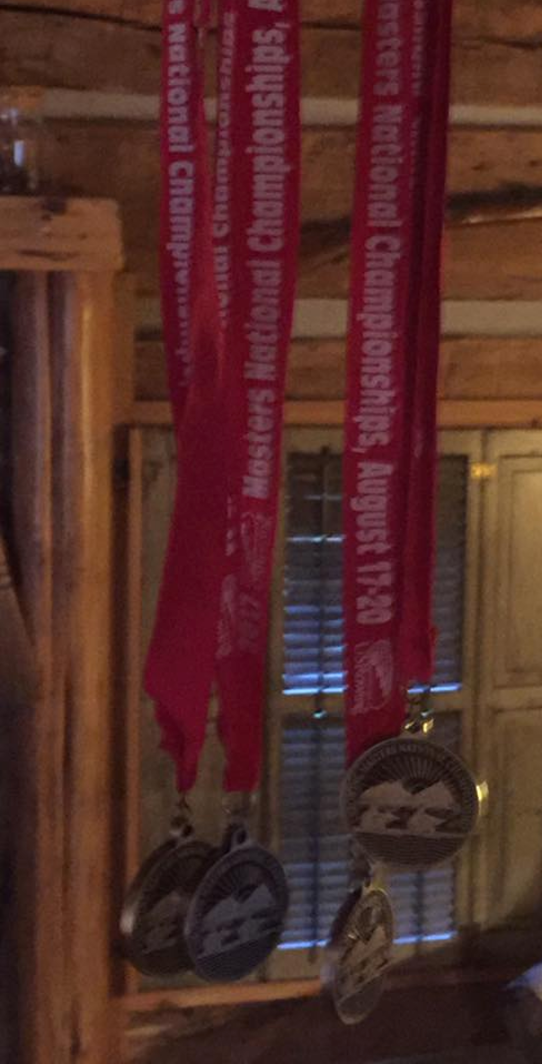 medals won by – I think – every member of the competitive program and at least eight club team members.

For a relatively modest program – we had fewer entries than any of the other top five in the team point standings – we did well, finish fifth overall, fifth in the women’s standing and ninth in the men’s.

Having once been the one guy on the men’s team to finish the Nationals without a trip to the podium, I am always pleased to see widespread prosperity.  Makes for better beer drinking and makes those early spring and late summer practices worth it.

Every now and then I reread one of the rowing classics – Boys in the Boat, the Amateurs – to get myself through a blue spell. But even better would be to imbibe the heady oxygen from a night like Sunday night pumped into a tank and doled out occasionally at the boathouse over the course of the season when spirits began to sag.

My own last race was Saturday, the Open E8 — racing the dreaded Rolodex crews Palm Beach and Chinook, who recruit rowers from across the country and come together for major regattas. (For “club” races, all the guys in the boat have to live within 50 miles of one another). San Diego, the final entry, was kind of a friendly rival, as well — between us we’ve won a lot of the geezer races over the last couple of years.

Against Rolodex crews, I always feel like we’re the scrappy little local kids challenged to a black and white movie sandlot baseball game by the rich kids from the boarding school up the hill.

Unlike in the movies, however, the scrappy little local kids often get their asses kicked.

Palm Beach was a cipher, but we felt like we might have Chinook’s number — they’d beaten us by a seat in an E4 at Diamond State and we’d had to play catch-up to their 8, but did pull out a win.  In both cases they’d shot out on us at the start, but we’d walked a lot on them by the end.  If we could stay close at the beginning of this race, we figured, we could catch ’em.

Well, as Mike Tyson says, “everyone has a plan until they get punched in the face.”  Our face punch didn’t come until the last 300 meters or so.  We’d actually had an admirable start, left San Diego far behind and were inching away from Palm Beach, when we dropped it into overdrive for the finish.  And Chinook dropped it into over-overdrive and finished us off.

It kinda hurt a little extra because we, once again, rowed beautifully.  Like, I never knew a boat I was in could row so well.

But, then, we rowed so well, we were actually pretty happy.  What can you do against the Rolodex kids — and we were only a couple of seconds back?  Next year…

And one of the guys in our boat –Duncan, who stroked Oxford to an upset 5-length victory over Cambridge in 1963 — is on Palm beach’s Rolodex (he went from a Palm Beach boat to one of mine within an hour on Thursday, taking a gold in both races) and his glee at beating “his boys in Palm Beach” was contagious.

And so I finished my last race with a silver, the last of four medals, and sped off to Chattanooga to rescue my girlfriend from the airport, and grab a meal and a martini in downtown Knoxville.

You can blame yuppies for a lot of things.  But we made rowing as big as it is today.  And we made it possible to get a decent meal in a restored warehouse district in a smaller mountain-bound city after a hard day of rowing.

The next day, Sunday, in between visiting the Museum of Appalachia and hunting down my grandfather’s hometown in an isolated backwater (there’s no longer a town, just a church and a graveyard) on the edges of Appalachia, we drove down to the course to catch my good buds Jack and Meredith stroking one of the women’s eights to a gold. I’d felt guilty because we didn’t place when we were in the mixed eight together, so I was pleased to see them win.  Also pleased that, since I didn’t race that day, I had an excuse to drive off without loading the boats.

I took a last stroll around the grounds.  Oak Ridge truly is a great venue both to row at and to watch from. On Monday, after the eclipse, we ate our barbecue at one of the tables just downriver from the course, because evenings on or near the water there are pretty spectacular.

After the trip to Peeled Chestnut, I decide to drag Laura to the dinner.  I probably owe her one – she has sat through a lot of crew talk during our time together.

But rowing is probably the ultimate team sport.

And that means nothing feels better than celebrating with the team.

(And then heading off to the eclipse. Every regatta should end with a total solar eclipse.)

Is Rowing “The Hell of Togetherness”?

Posted on October 21, 2014October 21, 2020 by Rebecca Caroe
As an image of the hell of togetherness, rowing takes some beating: mesmerically repetitious, shatteringly hard work, and… read more