Moving Beyond a Simple Half Truth

Let’s start by discussing an oft-cited and equally oft-misunderstood sacred cow: the idea of the 2 to 1 ratio between recovery and drive. This 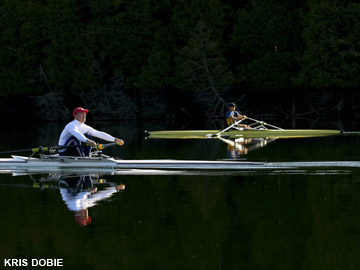 chestnut is something that is frequently used with beginning scullers and rowers when we are making our first efforts to teach them to slow down the recovery. And because it frequently makes immediate, positive, and lasting changes in a beginner’s stroke rhythm, both coaches and athletes become very attached to it and sometimes come to the erroneous and damaging conclusion that it is something written in stone, and that it applies across all ratings and pressures. It does not. A true 2 to 1 ratio is almost unheard of, even at very low ratings in comparatively faster boats than the single.

To take just one example, a crew rowing at 20 strokes per minute, a relatively low rating, is moving through one full stroke cycle every 3.0 seconds. For that crew to have a 2:1 ratio, the drive would take 1.0 seconds and the recovery 2.0 seconds. Sounds easy enough, right? I’ll just PULL REALLY HARD!

Unfortunately, the physical reality is that when you are rowing, you aren’t really moving the oar(s) through the water, you’re placing the oars in the water as levers and then moving the boat past the blades. The speed at which you can accomplish this is determined almost entirely by how fast the boat is already traveling>, NOT by how hard you pull.

But don’t take my word for it – when I asked Concept2’s (and Craftsbury’s) Dick Dreissigacker about the length of time that the blade stays in the water at a given rating, he had this to say:
“drive time is directly related to length of stroke and boat speed. For the most part the oar can only rotate as fast as the boat moves past the blade. The idea that someone in a racing situation can rip the blade through the water significantly faster than the next guy is very doubtful.”

For further corroboration, he suggested that I look at some of Dr. Valery Kleshnev’s articles.

It didn’t take long to find one pertinent to this question. From the Rowing Biomechanics Newsletter, No.3 Volume 3 of March 2003, Dr. Kleshnev provided detailed graphs of time spent on the drive and recovery across various boat classes. Suffice it to say that based on Kleshnev’s data, a 2:1 ratio is almost unheard of for singles and pairs AT ANY RATING, and is only seen at comparatively low ratings (22 spm) even in 8+’s, 4X’s, 4-‘s, and the occasional blazing fast 2X. A world-class single sculler rowing at 16 spm will spend about 1.4 seconds on the drive and 2.3 seconds on the recovery – close but not quite 2:1 ratio. At 30 spm, the same sculler will spend about 1.0 seconds each on drive and recovery.

So, does that mean that virtually all rowers and scullers are rushing virtually all the time? Of course not. The fact of the matter is that a crew rowing in the high 30’s or low 40’s can have 1:1 ratio or even a bit less than that without rushing the recovery and row with beautiful rhythm at the same time. At higher ratings, good rhythm becomes largely dependent on one’s ability to follow the simple dictum first made famous by UCLA basketball coach John Wooden: “Be quick but don’t hurry.”

In short, as useful as the idea of 2:1 ratio is for teaching novices not to rush, it isn’t reality at most ratings, and beyond a certain point in an athlete’s development, thinking about it becomes as much a hindrance as it once was a help. So, if the 2:1 ratio can’t be used as a teaching aid past a certain point, how should we then teach and learn better rhythm?

Let’s begin the second phase of the discussion with the idea that although rhythm is a term that people tend to use freely and usually without trying to define, it is also a term that has a commonly understood meaning. With apologies to Potter Stewart, we know good rhythm when we see it. I have heard a great many people say that rhythm of any kind cannot be taught, that it’s “something a person either has or does not have.” My usual response to that nonsense is “the sun revolves around the earth, which is flat!”

While it may very well be true that some of us are born with more smoothly functioning nervous systems than those of other people (Fred Astaire always springs to mind), it is self-defeating to adopt the idea that the functioning of the nervous system cannot be refined. I do not currently know how to waltz, and I am certain that my first efforts at it would be clumsy ones. I am equally certain that, with practice, I can learn to do it and that both I and anyone watching will be able to attest that my waltzing rhythm has improved from my first attempts to my 500th and beyond. It is not merely a matter of learning the steps, either, but rather a matter of training the nervous system to do something it has not done before. Ultimately, if you believe that old dogs cannot learn new tricks, you might as well not try to improve any aspect of your sculling, or anything else you do, for that matter.

Part III: How to Do It

As a starting point, it is a good idea to remember that the stroke cycle is meant to be continuous, so when I set out to try to improve a sculler’s rhythm, the first thing I have the sculler do is focus on keeping the hands in continuous motion. This almost always produces a change in stroke rhythm, since almost everyone has at least one hitch, pause, or hesitation somewhere in the stroke – most often around the release.

Initial efforts to keep the hands moving often lead the sculler to a higher rating and/or a bit of feeling as if he is rushing, so a good second step is to do a drill that shifts the focus to a livelier drive contrasting with a more relaxed recovery. I remember that when my coach in college was frustrated that our boats weren’t moving well, he often called for something he called the Blade Acceleration Drill – the idea of catching at something less than full pressure and building to full by the moment of release. This almost always made the boat feel smoother, more rhythmic, and faster.

Beyond those two very basic drills, the variations are endless: try focusing on keeping the hands moving at a constant speed from release to catch. Or matching the speed of the handles with the speed of the seat for the first portion of the drive. Or on taking the blade straight to the entry without hesitation. Improving rhythm is largely a matter of focusing on something that produces a change in rhythm, observing what the change is, repeating and practicing those things that seem to improve rhythm, and discarding (or trying again with a fresh perspective) those things that seem to make the stroke less rhythmic. Deliberately rushing/starting/stopping/jerking and alternating that with one’s smoothest, most rhythmic rowing for the sake of feeling the contrast between the two can also be very helpful.

Experiment. Try different things. And if you find something helpful, write it down and email us about it – we’re always learning up here, too.

A guest post by Troy Howell of Craftsbury Sculling Camps

Feathering on the recovery

Posted on August 27, 2018October 15, 2020 by Rebecca Caroe
Feathering on the drive and feathering into the body is the subject of this “dock talk” by Marlene… read more