Birmingham Rowing Club tested out the Rowperfect RP3 and this was their feedback.  Read other users’ views on Rowperfect. 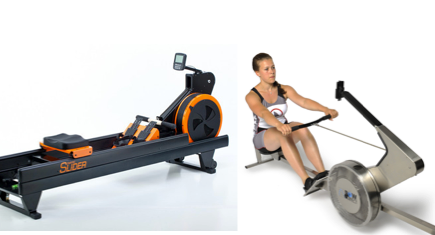 Was Rowperfect easy to use?

Generally yes, easy to use.  Most of us took a few minutes to make the technical adjustments need to feel comfortable on the machine, but this was generally intuitive – most of the squad have lots of rowing experience and the ‘feel’ of the machine gives good feedback on the deficiencies of the stroke.  A few commented that the vent to adjust the drag doesn’t make it obvious which way is higher drag (it’s numbered 1-10).  Perhaps clearer numbers like in C2 would help. [this has been changed in the newest model].

First impressions: Most felt that the RP is not aesthetically pleasing and looks a little off putting, particularly wit the bar bent under the seat.

Did you do any comparative tests?

Overall: definitely more useful for low rate technical work, but we wouldn’t want to do our 2ks on a Rowperfect!

What did the coach think?

The coach was impressed and has enjoyed the opportunity to do individual technical work with us on the RP. Has definitely seen improvement from those who made greatest use of the RP during the trial. Lessons learnt ont he RP have translated well to the boat.

What did the athletes / cox think?

The seat accurately represented the feel of being in the boat and it was very easy to focus on separation and co-ordination of m teh ovements at the catch.  The RP is very easy to assemble and dis-assemble, although it lacks a spirit level style bubble for levelling which was appreciated on the Oartec.  [there is no spirit level because the RP bar is NOT level.  The dip in the bar under the seat is what allows the seat to stay still when you row.  And so the bar is designed not to be level.  A heavier rower depresses the bar more than a lighter one.  That’s why you have to level the RP when you first get it by sitting on it and rowing without holding the handle to check that the seat goes back to the same place every time and doesn’t travel up or down the bar] Some noticed a click at the frontstops which spoilt the smoothness [caused by a stiff link in the chain – now fixed]. A slightly chunkier handle would be preferred.  The RP handle was a little too thin, although preferred to the very fat handle of the Oartec. We felt it was a bit too easy to ‘stamp’ away the catch instead of building gradually into the drive, the Oartec gave a more realistic feeling at the pick up whereas the RP encouraged a very sudden push with the feet which would probably ‘rip’ the blade through water in the boat.  The recovery feels very realistic, but the Oartec replicates the drive better. A note on stamping away the catch.  This will not ‘rip’ the water as long as you have the blade under the surface – in fact some of the greatest gains in boat speed come because the athletes learn exactly how much pressure they can apply at the catch while not disturbing the force curve.  What I mean is that if your curve goes up vertical at the catch and then slides over at an angle towards the peak force, it shows you’re stamping too hard – or you are not strong enough to continue the pressure you begin with and that’ll slow down the boat.  By adjusting the pressure at the catch so the force curve is rising continuously smoothly to the peak you can see exactly what will be efficient and effective in the boat.

Posted on September 30, 2012October 28, 2020 by Spring
Each month subscribers to the Rowperfect newsletter are included in a free prize draw to win one of… read more

Posted on December 4, 2006October 23, 2020 by Rebecca Caroe
This is a really cute demonstration of the new MKIV monitor. It *looks* like the real thing and… read more