A message from the ropwerfect manufacturer who took his crew to USA to race in the big Boston head race.  He writes…

A great Regatta held on a superb stretch of water. For those who have never raced it I can only recommend it very highly. The bridges (five?) through which crews race are all very low, and increasingly crowded as you near the finish line. People literally three metres above you cheering and urging you on is a wonderful experience.

I raced in a Mosman 50+ crew with guys I have raced with on-and-off for up to fifteen years and have known for as long as forty years (Bryan Weir in our 5 seat was my School Captain when I was in primary school) so of course it was special to go through a campaign with friends like that, especially as we trained through a pretty cold and wet Sydney winter; it’s amazing how quickly the memory of those cold mornings fades in comparison to the racing experience!

Our Cox Beth Smith was Captain of Boats at Pymble in 2001; having as a crew-mate someone you have coached is a wonderful experience, I would recommend it just as unreservedly as I recommend the Head of the Charles and the job Beth did, particularly in the race where she was quite simply sensational, was a highlight for every man in the boat.

We got third, racing from position 35 and passing at least 13 crews (a record for this year’s HoC apparently). Starting so far back may have cost us a better result (1st and 2nd started from positions 1 and 2) but I’m pretty certain not one guy in the boat would exchange the experience of racing through so many crews with Beth urging us on, and screaming “YIELD TO STARBOARD – NOW!!!! at the top of her lungs to the thirteen crews in turn, for the chance of a better starting position. Exhilarating is the most apposite description I’ve found so far one of those races you keep in memory as a lifetime experience

Was it a “Rowperfect crew? Six of the eight rowers own a Rowperfect, and of the other two one is a very regular user and the other certainly has used one. Did we do a crew test, despite my unashamed begging??? Even some moderately organised Force Curve synchronisation?? Of course not this is Masters rowing and getting anyone to do a test is much harder than pulling teeth; as for organisation Will Liley, one of our rowing mates, sums it best: “Organising Masters rowers is as productive as attempting to herd cats. But two of us did a voluntary test, using the DOS software. The times we then aimed for in training were extrapolated directly from those tests and they were pretty much spot-on (at least for tailwind, winter saltwater around 15 degrees). In particular our race strategy I can say was almost 100% derived from those tests or at least my physiological limitations as determined by those tests dictated what I was prepared to agree to doïŠ!

I took the first of the Rowperfect Indoor Scullers across, and Coleen and Jim from Durham Boat displayed it at their stand (thanks guys). Unfortunately we did not have an interface available, though we did have plenty of users and some lovely compliments, including one from one of the greatest rowers of all time, and the original Rowperfect user, Frans Goebel (Frans raced in the 40+ Eight, also finding it difficult to win from mid-field his crew third as well).[Frans helped Casper Rekers with the machine development and algorithm verification ].

We had a surprise visit from Peter Dreissigacker of Concept 2 early on the Sunday morning, he came over to have a short row on the new machine not sure he was too happy about having his photo taken with the Indoor Sculler, but he was very gracious about the machine and we had a nice conversation.

Hopefully these results and reflections are of some interest for you; I’ll get back to trying to finalise production of the Indoor Sculler, which is definitely of interest to you! 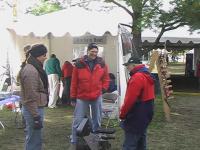 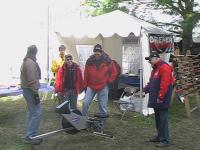 Peter is the tall fellow in the middle, Jim Dreher to the right in red/blue jacket.

Posted on March 7, 2018October 14, 2020 by Rebecca Caroe
If you’re looking for Christmas inspiration, or think your rowing video bookshelf could do with some bulking up,… read more 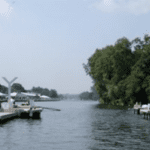