Thank you to all who participated!

Although we all come from different rowing backgrounds it’s nice (and somewhat frightening) to see we all have similar struggles and feelings towards our beloved sport of rowing! 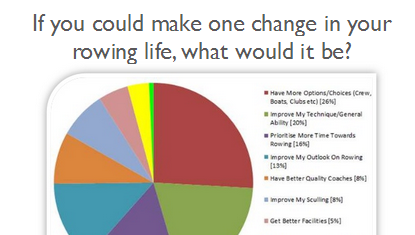 The summary results are in the slideshow at the bottom of the page.

Question 1: If you could make one change in your rowing life, what would it be?

Obviously improving technique/ability was always going to feature prominently.  It is perhaps a little surprising that this category ended in second (by quite a margin) which one could claim adds to the importance of choices within your rowing life.

Prioritising more time towards rowing came in third – which is perhaps a hybrid of the first two. A lack of choice which of course implies there are pressures outside of rowing (understandably the most common being money/work) and improving of technique/ability, something which is improved by simply spending more time on the water.

Question 2: What is your biggest barrier

Ironically a third of the respondents found themselves to be their biggest barrier yet not one said they’d change themselves (in Question 1). Unsurprisingly the next two top answers align with what was answered in Question 1.

I will add here that many respondents who answered ‘injuries/physical limitations’ answered with improving their general technique/ability with indications towards improvement of fitness or muscle strength.

Question 3: How does it feel knowing one change could make all the difference, but you haven’t made that change yet?

As expected, Frustration is the big one. However, 20% of respondents reacted positively towards this for two predominant reasons. 1: There was only one thing that needed changing & 2: The one thing they indicated in Question 2 they perceived to not be a major change.

Question 4: If you had to give advice to someone else with your exact challenge, what would you tell them?

In typical rower-fashion the general consensus was “Stick at it”. Most respondents who answered with a “Keep at it” attitude had previously answered that they were simply frustrated with their current situation – most of these situations are likely to pass or change in the near future.

True to their primal instincts 32% of respondents answered in a more selfish, inward focussed tone – stating that the best way forward was to think for themselves first, others second. Most respondents who answered this had also answered the one change they’d make in their rowing life was have more options. Many went on to indicate that “rowing is for me, not for my coach, my parents or my friends”.

Question 5: Are you satisfied with your rowing?

As expected most people love rowing! And so they should. Unfortunately however, 1 lonely respondent said they hated the sport. We here at Rowperfect pray that person rekindle their passion for the sport soon.

Thank you once again to all who participated and contributed to this survey. We hope to help address some of the issues identified in the near future.

Posted on November 4, 2014October 21, 2020 by Rebecca Caroe
We got a question from a reader: Brisons, Cape Cornwall Pilot Gig Club’s boat returning from a race… read more

Rowing friends are the best