Braam Malherbe – extreme adventurer, highly respected inspirational speaker and conservationist – together with rowing partner Wayne Robertson, are rowing on the vessel Mhondoro to Rio de Janeiro, launching the DOT (Do One Thing) Challenge.

Their journey, covering a distance of 6700km, has been undertaken to highlight the importance of sustainable living and to inspire the international community to Do One Thing (#DOTChallenge) for the planet in an effort to ensure a sustainable future. Their focus will be on the vital importance of protecting our Earth, mostly the plight and preservation of the oceans, on which all life depends. “Fifty percent of the air we breathe comes from phytoplankton and it is under serious threat,” says Braam. He continues: “We would like each person on this Earth to Do One Thing to protect our only home.”

Braam and Wayne will be on the ocean for the next two to three months, rowing 24/7 in two-hour shifts. This carefully planned schedule ensures that someone is always awake at night to avoid the many ships crossing the ocean. They began their journey on 7 February and have already covered more then 2500km. “We have had very little sun, which means our solar panel doesn’t always charge the batteries effectively. We are, however, managing the power and making water is our top priority,” says Wayne.

Braam and Wayne have also faced a few storms, during one of which the boat rolled over, leaving them under the water for five minutes. Braam describes the incident: “Waves broke over the boat and we were turned completely upside down a few times. On one of these occasions, the boat didn’t roll back up, leaving us upside down. We had to slowly move to one side without damaging the instruments. The boat then came back up, but we were under the water for about five minutes. Very, very scary!”

For Malherbe, who is no stranger to world-first expeditions, this row will be the first he has attempted on the ocean. All his expeditions have been driven by a purpose and he believes that when you have a purpose behind the ego, nothing is impossible.

Robertson, who joined the expedition only a week before departure, has crossed the oceans many times. As a yachtsman and master skipper he is very familiar with the unpredictability of life at sea, but this is his first time as an adventurer. More than that, he took up rowing only the week before the expedition and rowed this particular boat for the first time as they left Cape Town harbour on 7 February.

“It is vital that Wayne and I interact and get to know each other. From my past expeditions I have learned the power of humour as well as the importance of open, honest communication. If I have the slightest inkling, whether justifiable or not, that disturbs me about Wayne, I share it and Wayne does the same,” explains Braam.

“The physical challenge is big and the blisters are there in force, but our hands are already hardening under the torn callouses,” says Wayne. He continues: “We are rowing listening to music and audio books, which make it easier.”

The purpose and significance behind this epic row is very important: the DOT movement. DOT (Do One Thing) is a simple acronym that is so much more than a trend, a fad or a catchphrase. These three little letters boldly aim to unite the world in the hope that, together, we can save our planet. By connecting like-minded individuals on a global scale through its website and app, the DOT movement encourages every human being to Do One Thing to protect and preserve our planet from further destruction and harm.

Braam and Wayne still have a long way to go, but their spirits are high and as they develop their friendship on the ocean, they are practicing the power of teamwork. They are together 24/7 in extreme conditions and, largely due to the storm and a lack of sunshine, they also travelled with almost no communication for a few days. “It is a challenge as we would like to communicate more, not only with our families but also with all our followers who are waiting for updates from us,” says Braam. “We would like to inspire everybody to ‘pull together’ with us. If each one of us can Do One Thing for the planet, we can ensure a sustainable future. In nature, if you are not an asset, you are a liability. We, as humans, are not exempt from this fundamental principal.”

Track Malherbe and Robertson live via the DOT appand on the website: www.dotchallenge.org

To set up an interview via Sat Phone please contact Osi Raviv 072-7080696 | pr@braammalherbe.com

speaker, conservationist, man on a mission. Too numerous to mention here, Braam’s many achievements in the name of conservation include running the Great Wall of China (a distance of 4218 km) in just 98 days (world first), training rangers for counter-poaching operations, racing to the South Pole while pulling his own sled, and running the entire coastline from Namibia to Mozambique – a distance of 3278 km (world first). But Braam’s most important contribution to conservation is using his accumulated experiences to inspire ordinary people to make a difference, not only in their own lives, but towards the future wellbeing of this planet. As a youth developer, he facilitates outdoor leadership camps, where he teaches children about their place in nature as well as how to survive in it. As one of the world’s most sought-after motivational speakers, Braam never fails to leave his audience inspired and empowered to embrace change for good. Now he has embarked on his greatest adventure to date, and he wants the entire planet to join him.

Skipper, boat builder, marine surveyor, cyclist, surfer, musician, passionate eco-warrior. Wayne has had a close relationship with, and a deep passion for, the sea since childhood. In addition to building and skippering ocean-going vessels, he’s been surfing for 39 years and big-wave surfing for 10 years. Sea legs aren’t the issue. The issue is the current state of our planet, and it’s one he’s tackling head on by joining Braam on the row to Rio. No stranger to endurance sports, Wayne has completed numerous multi-stage mountain-biking events. He was the first person to attempt and finish the Argus cycle tour on a unicycle – twice. He was also the first person to ride the tour on a BMX, and did so 12 times raising funds for charities close to his heart. Wayne has first-hand experience of adverse weather conditions both at sea and on land, and spent time in Antarctica constructing modular pods ideally suited to extreme environments. As husband to Cindy and father to six-year-old Willow, Wayne’s motivation in raising awareness of the DOT Challenge is personal: to leave the planet in better shape for his daughter.

Braam Malherbe’s DOT Challenge vessel is named Mhondoro, after Mhondoro Game Lodge in Welgevonden Game Reserve in the Waterberg (Limpopo province/South Africa). Mhondoro’s entire operation is based on sound environmental conservation practices and it is committed to making a contribution in each of the DOT Challenge categories – water, waste, conservation and energy. The owners of Mhondoro, Frank and Myriam Vogel, are passionate conservationists and proud sponsors of the DOT Challenge. Through their MF Foundation, the Dutch couple is making a significant contribution to conservation in South Africa as part of a game purchase project to increase numbers in the 35 000 hectare Welgevonden Game Reserve. The reserve has a successful anti-poaching unit and is known for protecting a large white rhino population, in addition to the rest of the Big 5 (lion, buffalo, elephant and leopard). This year (2017) Mhondoro Game Lodge will launch a drive to eliminate the use of disposable water bottles from lodge operations by providing guests with pure filtered water from source in the Waterberg, and the use of refillable glass and aluminium bottles. Other game lodges in the region are challenged to join the @DOTDo1Thing #NoPlasticH2OBottles challenge and ‘Do One Thing’ to protect and preserve our planet.

Their 6.8-metre-long vessel was built in the UK and renovated locally by Robertson himself. Onboard they have all their supplies, including food, medical kits, maintenance tools and desalination systems to make fresh water. All the electrical devices used for navigation and communication are charged by two solar-powered batteries. 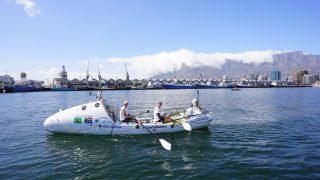 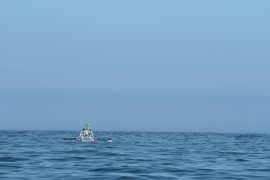 How to get leg power on a Water Rower

Posted on July 17, 2013October 20, 2020 by Rebecca Caroe
We got this question from Debbie English: Bradford on Avon over the River Avon (Photo credit: Wikipedia) How… read more