Robbie Manson at the catch, poised (with a relaxed neck and shoulders), powerful, connected, maximally compressed in his legs like a coiled spring.

The beginning of the drive:

as the legs begin driving the hips back, his back immediately works hard against the legs, the spine elongating itself, reaching its maximum length below left :

Towards the end of the drive (above right), the legs are down; and the breath is squeezed out as the arm draw commences. Although there is a pronounced layback, his lower back is supported over his pelvis.

Next the really interesting part:

The body movement of the sculler’s (“ferryman’s”) release:

Notice how, while the arms complete their draw, he is already moving up from his pelvis. The body is not stationary – waiting for the arms to catch up and then extend forwards again before the body begins to swing forwards – it is like an inverted pendulum: there is no perceptible pause between backward and forward swings, one following directly from the other. Release into recovery involves body and arms moving together. Then, as the knees begin to break, his spine has assumed its maximum length in the recovery phase.

Just beyond half slide, his body is already at the angle required by the end of the recovery, prior to catch:

So, sculling is not a fixed art, with only one way to be imposed, whether it’s British Rowing Technique or any other national style. In a single scull you are free to row as you like.

Robbie Mansom’s main body movement in sculling is beautiful, as well as very fast. In Posnan, 2017, he broke Mahe Drysdale’s world record for 2K by 3 seconds. At 28 years old, coming into his peak, he is more than 10 years younger than Mahe Drysdale and is significantly smaller at 189 cm and 89 Kg (compared with the older man’s 200 cms and 99 Kg).

Their future contests will be intriguing.

He feels he can still get better and he has the potential to do so. The most obvious area of improvement, perhaps, could be his oarsmanship skills. The hold on the handles looks a little tight and he’s forced to drop his wrists markedly at the release, rather than rolling his fingers.

Jonathan Drake, February 2018, author of Rowing from a Holistic Perpective 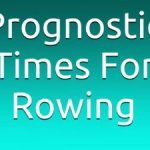 Prognostic Times for Rowing Part 2 – The History Of Prognostics

Posted on January 13, 2020October 14, 2020 by Ainhoa
This is part two of our series on Using Prognostic Times for training. In the Part 1 we… read more

Posted on April 29, 2016October 23, 2020 by Rebecca Caroe
Browsing around Linked In recently I found this great guy, Olivier Gouraud who has designed a new rowing… read more