Field in Beijing, Peaking and training in Penrith

Looking at the field in Beijing I think it has the potential to be very close when everyone gets to their best. Our main opposition will come from the Australians, the Chinese, the British, French, the Slovenians and the Estonians. So just about everyone! It will be tough even to make the final.

It is quite a contrast to my days in the singles where I used to feel I could have a bad day and still walk into the final. I think in this field if you have a bad day in the semi final you won’t make the final!

More… But that is standard in rowing as a rule of thumb the bigger the boat the tighter the field. If you look at the fours or the eights it is even closer again.

There is always talk about when to peak and peaking too early but it is not really a concern. Nathan and I are a consistent crew I’ve always believed you should be within half a percent of your top speed all year round. All this talk about peaking and so on which you hear across all sports – it is a pretty subtle thing. Yes, of course these other crews will come up and it may look like it is closer but for us it is just where we are at.

We definitely haven’t peaked we have just been training normally the program that we are on is very much aimed at the Olympics. Being in our build up phase and having strong results is very positive. I think the fact that we are leading is more to do with the other crews not having such good performances rather than the fact that we have peaked or anything like that. Everything we do is channelled towards Beijing and we hope there is more speed to come!

Our coach Chris Nielsen has been very positive as you would hope. He is happy about where we are technically and we will just keep on keeping on. We have had some good training sessions with the coxless four and their results were encouraging in their last race.

Penrith is a great training venue you can still go one way a long way which we will need to do plus it is a good base for speed work. It was the fours idea to go to Sydney and we are really just ‘tagging’ along.

I think it will be a good move although it is not really the sort of place that you would go for a holiday. In that way it will be free from any distractions! I have organised a house and the family are coming over it is school holidays for Sophie (five years old). Then they will come back to New Zealand and I head off to Beijing.

It should work out well. I have got a few sailing regattas post-Olympics so it is pretty tough when you are away from your family for two to three months. The time in Australia will be a good way of all being together especially when they are all so young Hayden is two years younger than Sophie while Madeline is just eight months old. 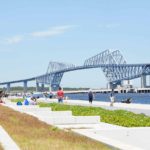 Posted on September 27, 2019October 6, 2020 by Bryan
The 2020 Olympic regatta course is ready to host Olympic Athletes. The Sea Forest Waterway and its Salt… read more

Posted on March 13, 2016October 23, 2020 by Rebecca Caroe
Following Oli Rosenbladt’s article on Row2k about the three options for FISA and the Olympics for 2020and beyond.… read more

Posted on August 10, 2008October 23, 2020 by Rebecca Caroe
The games are opened – waiting for our Heat It was my first opening ceremony and it was… read more