Commentators can turn a good race into a ‘cracker‘. It’s so important to be prepared, have some background knowledge and good insights. That’s one aim of FISA’s international regatta commentary team.

Paul Castle* is one of the team and maybe the most prominent. His skilled and multilingual regatta commentary is known from Olympic and World Championships.  Paul comments also smaller regattas and Rowperfect wanted to know more. Here’s a short interview.

Rowperfect: How did you get into commentating?

PC: In 1994, I saw a little ad in the Swiss rowing magazine. The Rotsee Regatta in Lucerne was looking for volunteers. Six months after my first turn at the mic, I discovered I’d been the only applicant!

What are some of the requirements for people keen to give it a try?

You need to enjoy both rowing and talking about it, always stay calm, and not be scared of mistakes. The accompanying art to learn is how to watch, think and talk, all at the same time.

What are some common characteristics of the FISA regatta commentary team? 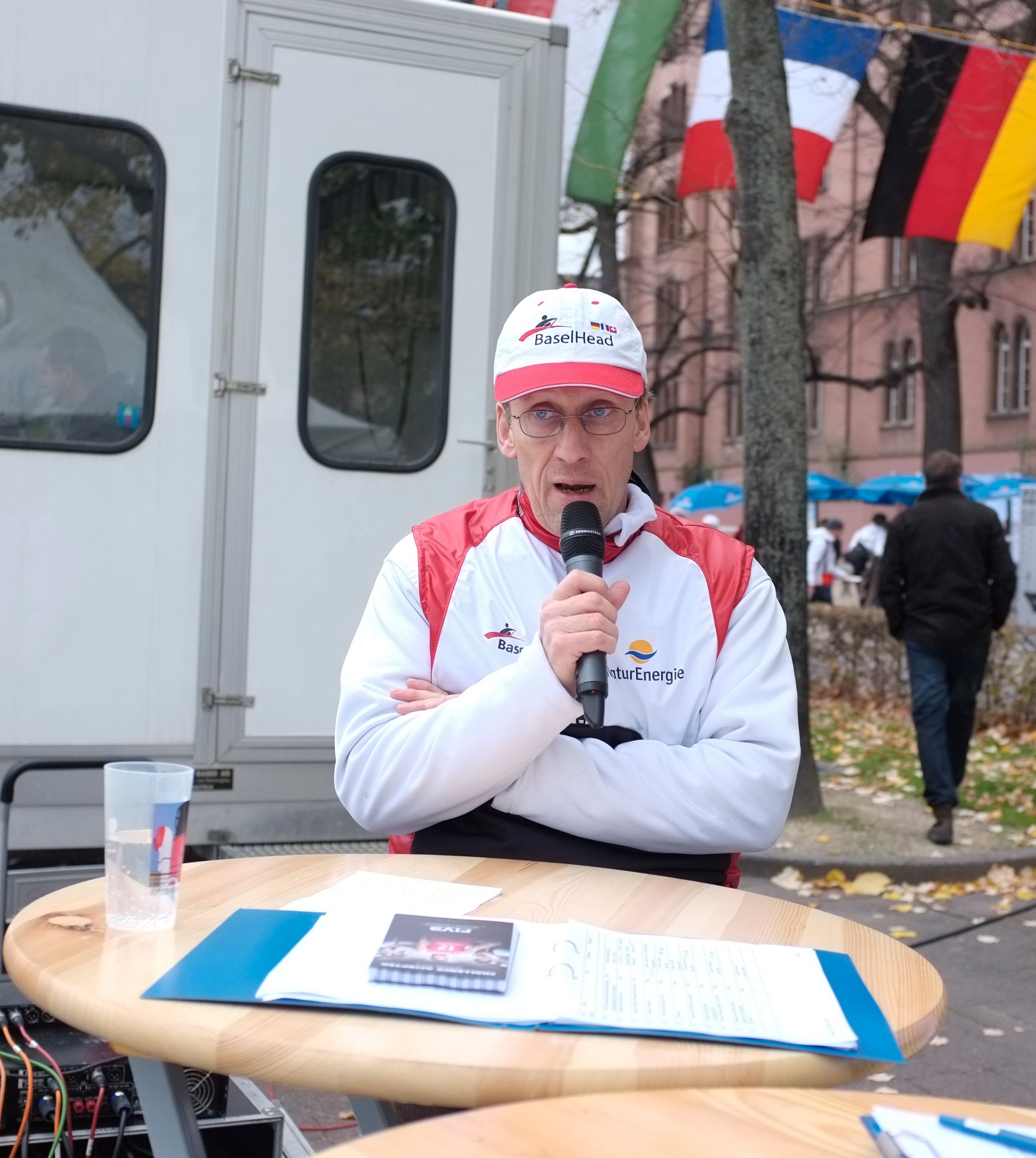 A lot of requirements for good commentators are pretty similar to those for rowers. We all need teamwork, stamina, hardiness, flexibility, fairness and willingness to travel. Hard work is another essential: A seemingly easy flow of information is all the result of careful preparation. Commentators who do their homework have the statistics, stories and stunning explanations on tap when it matters.

How would you describe your task?

We want to keep our listeners both in the picture and entertained. That enhances their whole regatta experience. We also have to be their “eyes”. Spectators on the bank can only see a fraction of the course. We paint their picture of the other 1700 meters. We also have to remember that most of them are not on site, but tuning in online around the world.

What was your worst moment so far as a commentator?

I’ve got wetter and colder pursuing this hobby than ever as an oarsman! We’ve also faced all manner of technical challenges. But being attacked on Twitter as a “moron“ at this year’s European Championships in Glasgow was among the worst. 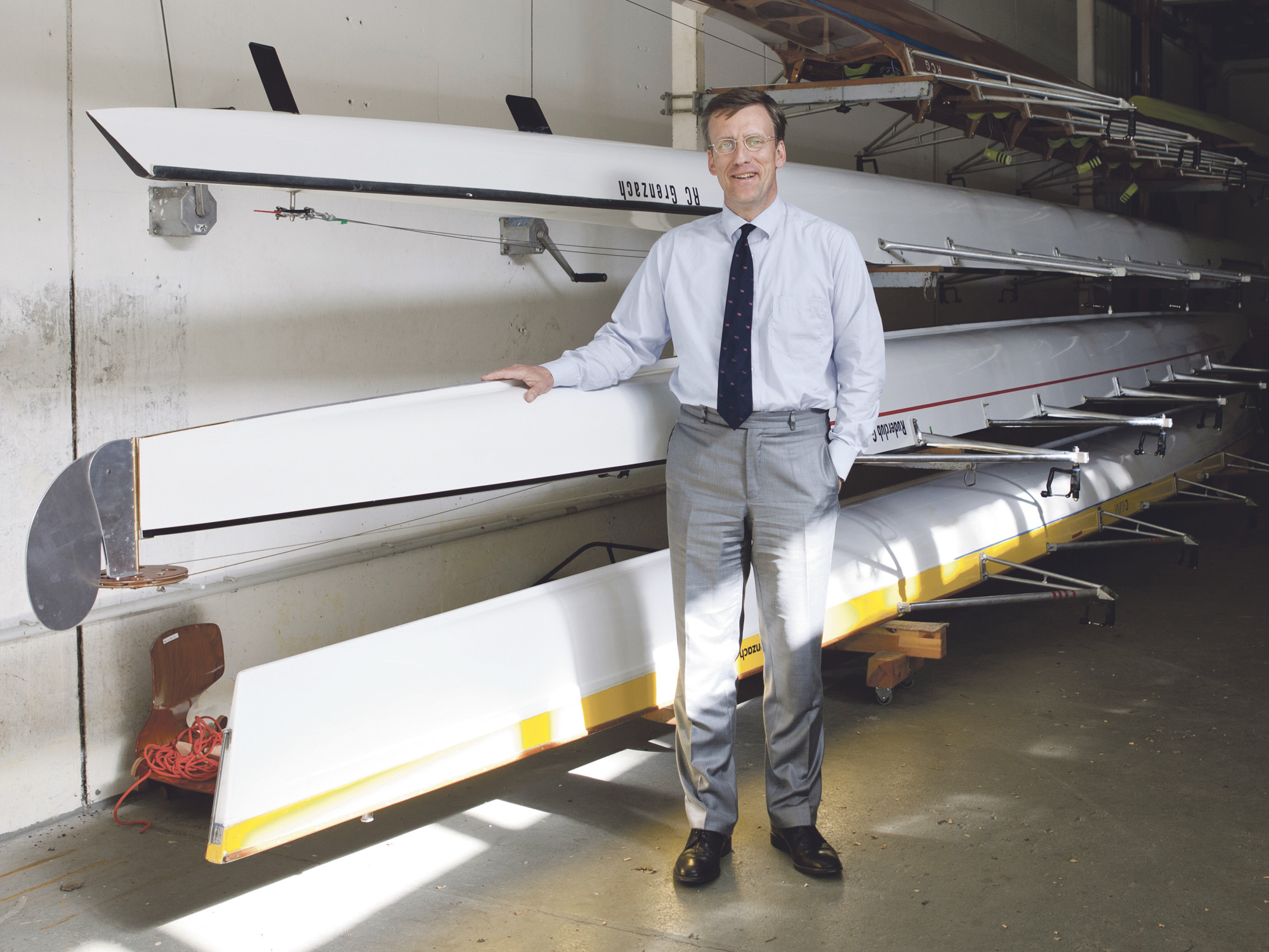 Paul at his home club in germany, RC Grenzach

And the best thing that’s happened?

I’ve had any commentator’s dream moment: You’re on the mic when a clubmate wins Olympic gold! A really nice guy you’ve known since childhood and who just missed a medal four years earlier. For a second, you throw neutrality to the winds and yell your delight. That moment in Rio will be with me for ever**.

What should somebody do who‘s interested in becoming an international commentator?

Contact me! We offer a trainee opportunity every year on the Rotsee; other regattas are also in the plan. Applications are welcome at any time: paul.castle@ruderclubgrenzach.de

*Paul Castle (55) grew up in Cambridge (the original UK one!) where he rowed for the ‘Nines’. His first encounter with the sport, however, was at Westminster School. On his 20th birthday, Paul lost in the Oxford University Lightweight crew against Cambridge. He later rowed in Heidelberg, Germany, and from 1999-2017 was President of RC Grenzach on the Upper Rhine. He has commentated at five Olympic regattas.

Simon Niepmann, who began rowing at Germany’s RC Grenzach, won gold with the Swiss LM4- at the 2016 Rio Olympics.

Rowperfect is 3rd in the world ranking

Posted on October 8, 2010October 22, 2020 by Rebecca Caroe
Wefollow is a service allowing hashtags for key words on twitter to be associated with your twitter account.… read more

The Wingfields perspective from a single scull

Posted on November 10, 2009November 3, 2020 by Rebecca Caroe
Graeme Coleman was the doughty club sculler who took on the might of international giants in last week's… read more

Why we love Magik Oarlocks

Posted on January 5, 2015November 2, 2020 by Rebecca Caroe
A reader writes Magik oarlock elastic bands We have used the Magik gates for many years and like… read more