The stands are full for the home team’s first showing today. One boat will miss out on the final. It’s a powerful start and the Netherlands take a few seats after 100m over GB. Germany were slowest in the heats and are in fifth. Half a length between the whole field. Romania settle higher than GB and take two seats to move into second. GB and Australia level for third. The Dutch remain two seats ahead of the Romanians at 500m but this closes to one seat towards 750m. GB are slipping back but have 7 seats over Germany. Australia sitting in third. Inches between Netherlands and Romania as the Netherlands press on and try to squeeze out to a seat advantage. Australia three seats down coming towards 1500m. Germany over a length back and look to go out. It’s a drag race for first place. Nothing between them with 200m to go. The Dutch pull two seats ahead to cross the line first. Romania have to settle for second, three-quarters of a length over Australia.  GB finish in fourth, 7 seats behind the Aussies. Germany come in fifth and will not race the final.

Dreher at the World Championships

Posted on August 27, 2007October 23, 2020 by Rebecca Caroe
The USA Mens Quad are using Dreher round sculls in their equipment for the World Rowing Championships currently… read more

Posted on November 2, 2020 by Veronica
Last week we talked about problems concerning the knees of rowers. One of the main issues with knee… read more 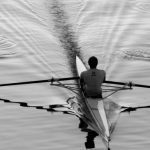 Posted on August 9, 2020October 27, 2020 by Tom Wall
Here is another story of individuals finding a way out of the Corona Crises. Crafting rowing art. Glen… read more