Coming into 500m the field are covered by two lengths. Argentina lead Australia and Germany by half a length. Germany move into second, rating higher than the rest of the field. Argentina lead Germany by three-quarters of a length. Australia are in third by the same margin but being challenged by New Zealand and Italy who are level and half a length back. Germany still rating higher than Argentina. At 250m those three are level. New Zealand and Italy lift their rate and are storming through. The Germans have nowhere to go and are fading. New Zealand break through into second and Italy lift their rate. They also move past the Germans. Germany look across and know they’re beaten. They struggle across the line with heavy strokes. Argentina, New Zealand and Italy go through to the final. Germany paid for their high rating over the first 1500m and finish dejected in fourth. Italy embrace each other.

This one is even closer off the start. The Solvenia, Lithuania and Norway bows are in front at 250m. Spik and Cop of Slovenia move in front. They pick up the catch very quickly and make the most of their length. Their spoons accelerate to the finish. Experience shows as they push out to a length. Lithuania just lead Norway for second place. GB push through Norway at 1000m into third. Spik and Cop are now two lengths ahead. Their bodies maintain a good angle as they drive the legs. The transition from legs to body to arms is so smooth. 1500m and Spik and Cop are not letting up. Lithuania lead GB for second by half a length with Norway two metres behind. GB now threatening for second but Lithuania respond. Spik and Cop of Slovenia win. Lithuania are second with GB taking third place, only a metre ahead of Norway.

Posted on February 21, 2021February 20, 2021 by Tom Wall
Believe it or not: I gained weight while going skiing. When I planned my ski vacation in the… read more 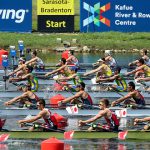 Future for Rowing Lightweights at the Olympics

Posted on September 29, 2017October 13, 2020 by Rebecca Caroe
Paul Hart writes Given the planned limitations at the next Olympics( a single men’s and women’s lightweight event),… read more