Wind shifting round to a side wind from bow side

semi Final 1: USA, Netherlands, Switzerland, Great Britain, Germany, Czech Republic.  At 500m Swiss lead with Great Britain and Germany third.   Netherlands  trail with Czech Republic last.  Swiss lead out with Britain slightly under-rating in second.  At half way, Swiss, Britain and Germany with USA and Czech joint fourth and Netherlands last.   Germany looking good in third place but Switzerland and Britain are stroke for stroke as they come into third 500 meters.   These three nudging ahead of Czech Republic overlapping with USA.  Coming into last 500m and GB take the lead by a few inches with Switzerland and Germany 2/3 length behind.    Britain start to work really had and they get in front of Switzerland  with Holland coming through hard and Germany just in third .  At the line GB first, Swiss second and Dutch third by half a length and Germany fourth by a canvas losing out in the sprint. 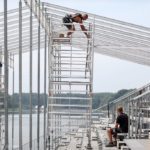