There is an extremely good discussion on RSR about the natural buoyancy of oars and sculls and how deep they should be in the water during the power phase.

Paul Smith kicks off with

I've been having to fight my rowers on this the whole season, as they have been well ingrained in the "floating level", "30cm of shaft", etc… mantras that they have heard, and exaggerated dutifully to create great washy puddles that send a lot of water backward while not advancing the boat much.

And that was exactly the point I'd hoped to make, Caroline. Novices need limits which more experienced folk should dispense with.

1. Going deeper than the naturally buoyant level of the blade requires the rower to hold the blade deep during the stroke, adding the lifting effort from the shoulders to all the pulling effort they are already exerting. For fit athletes this may not be an issue (though even then it may), but for the inexperienced, I believe they will relax more then purely focusing their physical efforts on drawing the blade. In this case, ideally the naturally buoyant level of the blade should be deep enough (as already discussed).

2. If the draw of the blade includes a vertical component during the drive (as opposed to just at the catch and finish), I believe this will add to the vertical forces on the gates affecting balance. During the drive this may not have a great effect, but it will be very difficult for novices to keep these forces balanced between both sides of the boat towards the finish, where imbalance has worse consequences for the recovery. Again, an experienced crew may be able to feel the forces an adjust for any imbalance (though even then they may not).

I think my preference is for as little effort as possible for holding the blade at the correct height, and that blades should preferably float to the required depth when square. I'm sure it would be possible to attach small weights to the looms to achieve this.

And Paul Smith makes the observation about the dfference between Dreher and C2 oars and sculls. [I have obswerved this myself many times but few others seem to have noticed].

I've not seen a Dreher Sweep oar, the "floating level" might be about right for their Sculls, but it is far deeper than any C2 blade will float. I suspect that the Dreher blades, if not attached to a shaft would actually sink (even when feathered there is no part of the blade above the surface if they are left to their own buoyancy), whereas the C2's float very well.

Which brings us back to Kit's observation – that any effort spent holding an oar into the water at the 'correct' depth, is effort that could be translated into power to move the boat. And so in my view, an oar or scull that sits at the correct depth naturally and doesn't require effort to hold it covered with water during the power phase, is an asset to the crew who can expend their power on other things (like working harder) instead.

[We have asked Jim Dreher to comment on this].

One thought on “Natural buoyancy of oars”

Posted on April 4, 2012October 29, 2020 by Rebecca Caroe
Apps for video analysis are getting easier and easier to find.  This week we review two: Sprongo and Coaches Eye.… read more

Stampfli Grips for your boat

Posted on February 23, 2016October 23, 2020 by Rebecca Caroe
Considered by many to be the best sculling handle grips, Stampfli grips are sold on the Rowperfect shop… read more 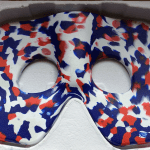 Posted on May 15, 2020October 14, 2020 by Rebecca Caroe
Stuart Harrison has done a comprehensive review of the ProW Rowing seat pad that helps to relieve back… read more