Michelle spoke to Rowperfect in the Press Office after winning the Princess Royal Challenge Sculls beating Jen Goldsack in the final.

How has your season gone so far?

It will be good to race at the worlds and qualify for Beijing. [She did qualify, winning a bronze medal in the process her career second].

National selection in April was cancelled and there will be a trial in July 30 at Princeton because I am not going to Luzern.But Liz Leary entered me for HRR without my knowledge.

I have never raced Henley before. I heard a lot about it. First impressions are the course looks like a cup cake all pink and white and very beautiful. Strange to have a race course down a social scene but quality is great, it very high. The mix is interesting in the womens singles event. On this course you can let your guard down. You have to fight for every stroke. I heard cheers and wanted to look across today but I knew that was trouble from my first race when I nearly caught a crab.

Just like the Longfellow Bridge on the Charles it is swirly, rough water and this was a challenge for me.

Today I pulled into the wrong station at the start. The Elvis boat distracted me. [An annual attraction at HRR is a group of men dressed up as Elvis on a motor boat driving up the river.]

What do you think about before a race?

5 minutes before the start I am thinking I make sure things are set, I check my uni [all in one rowing suit], focus on little things. Think about legs and feet standing off the catch, dont want to get into my shoulders. My start was a little shaky today.

What do your row in?

I row an S15 Empacher with 2 stay riggers. It was the first boat I had as I was getting up to speed in and, like a little superstition, I stick with it.; It feels solid.

Charley is my technical coach. I do pieces with Riverside [her Club] and Steve Tucker at Union twice a week. The rest of the time it just me and a speed coach.

Tom Terhar writes the programme. He is the new U.S. womens national team coach. done pretty much the same thing with a couple of tweaks each year.

How are you preparing for Beijing?

The heat in Beijing will be bad and have started training later in the morning to get used to it. The recovery will be an issue getting tired just walking to the course. We used ice vests in Athens to combat the heat there.

What is your background in Rowing?

I started rowing in 1998 at Radcliffe [Harvard University] in sweep. I was not that fit. I played tennis in high school and I wanted a team sport, choosing ultimate frisbee initially. The rowing meeting was before the frisbee one and I tried it as my room mate had rowed and said I would be good.

What advice do you have for young athletes?

Just have fun. I came to the sport later and wish started at 12. Use it to gain athleticism.

What is your ultimate aim in rowing? And how do you get there?

I would like to win a Gold medal in Beijing.

I use smaller goals, improvements every day. Be in peak form and the best shape. I push my limits and feel that each year is it better.

When it tough I think of the goal and what does it take what the competition is doing. This motivates me not to slack.

Crew mates say if you want to be good you will have to do it more than you want to I try daily to do my best; make an improvement. Stay on task in a broad sense.

I can push myself through which is a learning I got from being in the single. It has been good to get more people interested in sculling in the US. 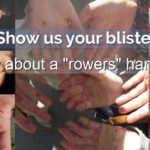 Blister pain, and how I learned to love Rowtex hand cream

Posted on April 21, 2019October 12, 2020 by Tom Wall
Rowperfect is always happy to receive feedback to our activities. Read below how Gareth feels about using hand… read more

The Down and Dirty Guide to Coxing: A Book Review by Clare Carver (RUBC)

Posted on January 4, 2008October 23, 2020 by Rebecca Caroe
The Down and Dirty Guide to Coxing Review by Clare Carver RUBC Like most coxing resources I have… read more