Having lived in Hammersmith for over 5 years the pubs along the tideway gradually became somewhat of a happy place for me.  Watching the activity on the water with the sun shining and the idle chatter of happy people made it easy to enjoy. Seeing the crews improve, excel and race each other throughout the year struck a cord with my competitive streak. So with a nudge from a few friends, I contacted the tideway rowing clubs asking if there was a learn to row group.

Along came Sons Men’s Captain and learn to row instructor, Sam!
6ft of muscle striding across the courtyard, perma-tan glowing and the air of confidence that only comes from knowing your stuff. ‘This is going to be tough’ I thought to myself, shaking his hand with all the ‘man strength’ I could muster. Needless to say I was committed! I felt both welcome and motivated the moment I stepped through the door, and let’s be honest, I wanted a perma-tan too!

So the course kicked off with a range of people of all ages, abilities, characters and fitness levels, learning this new sport at what felt like a rate of knots! It was great! We trained hard and learnt new calls, techniques and tips in every session. To my surprise our fitness and strength improved at an alarming rate, erg scores kept getting better and my love for the sport blossomed.

Then it happened! Two months in, I was approached by the Women’s Captain! Fresh faced from a morning on the river, guns out (now known as The Sons Guns!). Did I want to step up to the challenge, up my fitness and potentially seat race for the top boat?

Did I ever!!
Training went from a part of my life, to my entire life! I became a part of a crew that I would not only care for and respect, but would do anything for. I was lucky enough to get thrown into every boat available, for one to one training in an attempt to catch up on four years of experience. I found that all I wanted to do was get on the water, get in the gym and get better. I was blessed with a coach and team that would not only encourage and nurture that drive, but also temper it when needed!

As a Christmas present I got to complete my first 2K! Not quite sure what I was in for, I rocked up blissfully ignorant of what was to come and managed to not only set my PB that took me 6 painful months to beat, but also, find that ‘wall’ everyone talks about…I think I will be seeing a lot of this particular wall!

Do you want to race at Henley? …. I tell my friends I’ll see them in July.

We competed in every race we could, always learning how to work together as a team, finding out what we were good at together and how to get the most out of our seat, each other, and the boat. The bitterness of defeat tempered only by how much we had learned from each experience. With the support of the more experienced girls and their guidance and drive, it was easy to stay motivated and focus on the next challenge.

Along came Easter and a mini training camp. The seat racing started and the blisters got worse. The fear of leather hands slowly became a reality, and the sun came out…..ish. Finding new frustrations at every turn; desperately wanting to finesse those catches and get more power in the water, but not washing out or digging too deep … the list goes on. This made the start of summer both exhausting and a test of emotional endurance. I found a new wall, past the first one, waiting for me with open arms!

Not long until Henley!

Wow. What fun! Learning standing starts was hilarious! With only an evil laugh and a ‘don’t worry you will feel it!’ from coach, this Mel became a rag doll!  We competed and did well at Hammersmith, Chiswick, Dorney, Nottingham and Twickenham, where I won my first ever pot! Definitely want more of those!!! #GlugGlug

Two weeks until Henley!!!!
Camp was off the chart! I had no idea what to expect, only that I would be returning to England a little broken! There was rather a lot of hard work, some serious eating of cucumber (don’t ask), a few tears, more laughter than I can quantify, a grazed knee and an epic, unofficial win in the Bulgarian national championships. Oh, and it happened to be my Birthday, as you do!

One week to Henley!

We were feeling strong and confident, We had trained all we could, given everything to rowing throughout the year, so all we had to do now was our best, everything we had, dig a little deeper for a little bit more … and a little bit more, and … you know … win!

I have never experienced such raw power, energy and focus of so many women in such a tranquil space. The river is beautiful and it was calling to us!  We were so happy to finally be there!

Friday was a good day!  We smashed the time trials and stormed through the first heat making it to the Quarterfinals! Saturday brought the race against Oxford City, a strong team with experience and the technique that comes with years of rowing. They had us by a length and a half but we fought them, and they earned it! I found some new walls in that race too!
So thank you Sons for one hell of an epic year learning to row from Hammersmith to Henley, and of course, for the perma-tan. 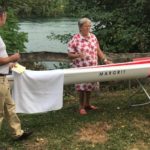 Late tribute to an Olympian

Posted on October 24, 2021October 21, 2021 by Bryan
We recently received an article about a late tribute to a former Olympian. Read more about the Olympics… read more 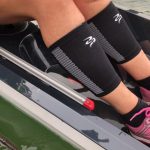 Calfskin’s and leg warmer for athletes

Posted on March 30, 2020October 14, 2020 by Bryan
RP Life Jacket and leg warmers Most rowers use calfskin’s to protect our calf’s from injuries. But they… read more