Years ago when I was a keen young professional coach and working in Switzerland for the large, rich, and powerful Seeclub Zürich I was handed a difficult problem.  It crept up on me as these things do – slowly and one non-threatening step at a time.

The club had decided to widen recruitment from the sons of members and acquaintances and wanted to be seen as a good option for boys’ sport in our local area. I was instructed to run introductory course in the school holidays, to advertise these widely and to stress that the holiday courses were free, open to all, and carried no obligation for further participation.  Adverts were duly placed and registrations came in at a satisfactory rate. My telephone manner and confidence at using my rudimentary German on the phone grew and things were looking good.

Just before registrations closed I got a call from an extremely talkative father who wished to have his boy attend.  Life stories were exchanged as he checked on my suitability as a candidate to coach his son and I got more information than I really wanted about his life and times.  The father was a local priest; not a problem even for a rabid atheist like me.  He had something like 11 children; brave but not my concern unless more of them wanted to row.  All the children were adopted; evidence of huge generosity and perhaps a rather unworldly nature but again, not my problem.  All the children were from poor foreign countries, this one from India, and of varied ethnicities; Again, not my problem, rowing is colour blind, I am a foreigner myself!

So the deal was closed; we were happy to have a new recruit, the young Ranjiv would present himself at the club at the appropriate time, all care would be taken and life was sweet for all. Then, just before hanging up at the end of what had become a long call, the father dropped his bombshell; the kid was blind.

Oh Sh*t!  What have I let myself in for?  How can I teach a blind kid who has a partial knowledge of a language I speak badly, to row?  Can we say no?  Are we prejudiced?

When it came to the crunch things were not as bad as I had feared.  The other children were generous and helpful, and no one cared that he was Indian.  Ranjiv learnt to row, though we found it was easier to put him in stroke seat, and even took part in the race we had on the final morning of the course.

For me the highlight of the week came when it was Ranjiv’s turn to steer the eight.  Off they went. I gave instructions from the coaching boat – left a bit, right a bit, now straight.  And straight they went. The blind boy was the best of the lot of them at steering straight.  Pinball is one thing but coxing an eight is something else!

Ranjiv’s rowing career wasn’t long, he went off to become an extremely good violinist, something he and his father thought he had more talent for than rowing.  I am prepared to admit I breathed a small sigh of relief but I am also happy to say that a little orphan refugee taught me more about coaching rowing than I had learnt in the fifteen years I had coached by then.

Problem? What problem?  Let’s get on with it and have a go. Thanks Ranjiv!

If anyone is interested I am happy to discuss how I helped Ranjiv to learn rowing.   Contact me through the comments section on this blog below.

2 thoughts on “It shouldn’t happen to a rowing coach, or “The Pinball Wizard”” 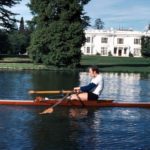 Posted on April 9, 2021April 8, 2021 by Rebecca Caroe
The weather is getting nicer (at least a couple of hours a day when it doesn’t snow or… read more