We moved back onto our river last week; we even moved back into our own rowing shed which is more than some could do.  After weeks, no, months of towing boats out to someone else’s river we’re back home – or something like home.

Home is the Avon in Christchurch.  That’s the Christchurch that had the earthquake, has now had 3 big ones (over 6 on the Richter scale) and umpty-ump smaller ones and is still shaking and is still more-than-half-expecting another big (ish) one.

The Avon was never a big river; the bits of it that run through town aren’t wide enough or even deep enough to take a single but head east and we have 5km, 3-4 lanes wide, that wind through narrow bridges out towards the estuary which, on a high tide, gives us a few kilometres more.  Back in 1950 a stretch of the river was widened and nearly straightened for the Centennial Games; National Championships were run on it through the 60s but you wouldn’t see that now, not on a 1830 yard course with only 3 lanes and with two sweeping corners to negotiate along the way, not when there are two 8-lane international standard courses within 4 hours drive, and not when the numbers racing here have grown from about 100 to over 1000.

But training is a different story.  Training you can be glad of a piece of water which, with very few exceptions, is rowable everyday, within 30 minutes biking from nearly all of the city’s schools and only 10 minutes from the centre of town. Those low-tide days can be taken as resistance training as can the times you pick up weed on the skeg or when the southerly blows into town.  You might rue the times your piece is interrupted by another crew having right-of-way at the bridge, champ at the bit when the novice coxswain puts his crew across the river in front of you, curse the boats blocking the landing pontoons but there is never any doubt that you are part of a community.  You see what other crews are doing; hear what other coaches are saying.  There are elite oarsmen rowing alongside novices; school kids alongside masters – you are seldom alone and there is always someone to watch, even to aspire to.

That’s the way it was and will be.  After September we lost our place on the river; we still had the buildings but the river was filling with the town’s waste after the sewerage system broke and the threat of disease sent us out of town.  The clubs and schools scattered to different waterways: other rivers, a couple of lakes, the sea.  We had to travel an hour or more further each way.  With nowhere to store our boats we were rigging and de-rigging each session. Coaches changed from bike riders to motorboat drivers.  And you trained with only your school or club’s crews.  So we lost people along the way: rowing isn’t the only reason people row . . ..

February’s quakes shut us down again and shut our buildings down as well. The winter was long and dominated firstly by ergs and then by the travelling.  But now we’re back.  Two of the clubhouses have been demolished; one is a car park.  Two more boatsheds are coming down; the one we boat from is standing but the doors of the middle bays are jammed shut from the twisting.  The hockey grounds across the way, too buckled for field sports, have been turned into a boatyard with fleets of skiffs resting on trestles.  The riverbanks have slumped and at low tide 3 lanes have turned into one.  The estuary is no longer at the same level and will probably always be too low for us to row on.  The towpath runs along the top of new stopbanks; what was once smooth seal is now a work in progress and coaches jolt and judder across the rocks only occasionally daring to take eyes off the way and look at crews.  The houses along the banks all seem to have removal vans in their driveways: they’re in the red zone and due to be demolished – farmland from the 50s to suburbs of the 80s to wetlands in the 20s – dust unto dust . . ..

Our rowers are mostly novices: it’s all new to them and not yet home.  There are plans for our river, some of them big but none of them high on the city council’s priority list yet.  Home will carry on being home without at the same time being the same home – perhaps it was ever thus.

What about your home water? What would you miss if all things changed? What can you appreciate now?

Posted on January 3, 2014October 22, 2020 by Rebecca Caroe
Rowing friends – what is the policy of your Club regarding overseas (or non-local) visitors? I went to… read more 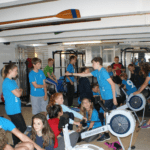 Posted on June 5, 2017October 14, 2020 by Rebecca Caroe
Following the discussion initiated by Rowperfect about British Club rowing is dying – can we stop the rot? We… read more