Reporting on a Royal Regatta which I have not frequented for several years gives the benefit of perspective granted by distance.

I enjoy the ritual and am simultaneously irritated by some of the rules. Gentlemen were allowed to take off their jackets because the temperatures were above 30 degrees. Everyone was uncomfortable from heat. Coming from a southern winter I was particularly affected.

Yale beat Princeton at Henley both in borrowed boats from Oxford and Cambridge!

And the delights are perennial. Firstly excellent rowing and racing of the highest quality. There are no “bad” crews.

New events for junior and club women were welcomed and attracted strong entries.

The frocks continue to delight. Such a range of colours and styles accessorised by shoes, hats and bags. Well worth keeping your eyes open for streams of “lovelies”.

Informal competitions exist on the bank. Spotting gentlemen in colourful trousers sufficient for a snooker table’s worth of balls all delivered in the correct colour order! The HRR Trews Snooker Challenge [note Trews is a Scots word. 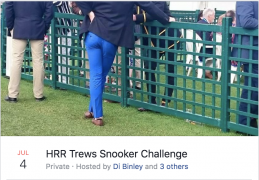 Anniversaries are marked with crew reunions and row-pasts for significant markers such as 30 or 40 years since a win.

Notable were the 1988 Hampton School crew who achieved the “Triple” win of National Schools, Henley Royal and Head of the River.  The crew rowed down the course together and also made a point of wearing their commemorative blazers – cut from the old school curtains!

And the RAF had a fly past for its 100th anniversary. 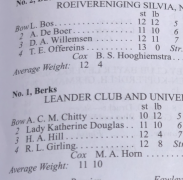 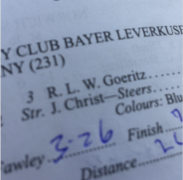 Henley is probably the only regatta in the world still recording athlete weights in stones and pounds and there is frequently fun to be had with the crew names – this year’s crop includes a Bayer Leverkusen crew stroked by the “big man himself” and the GB Womens eight who includes a titled blue-blood – who is recorded appropriately in the two seat. [Thanks to FatSculler for the JC image.]

Evidence of tradition is overlaid with evidence of change. Sponsored product placement from Aston Martin cars to Bremont timepieces mounted in a tree and strategically parked outside the boat tents.

Ahead by a Length tshirt

Hats will be worn!

2 thoughts on “Henley Royal – the delights and the quirks”

Posted on July 4, 2010September 28, 2020 by Rebecca Caroe
The headwind came back for sunday’s finals at HRR 2010 Thames Rowing Club celebrated its 150th anniversary with… read more

Posted on June 30, 2010September 29, 2020 by Rebecca Caroe
There are many places online you can go for a fine summary of great racing and the “HRR… read more