The question that coaches need to ask themselves is, “Why?”

Rowing is a sport heavily steeped in tradition, being the oldest intercollegiate sport, and boasting one of the longest running contests in the modern era (considerably longer than the modern Olympic Games) in the Oxford Cambridge Boat Race, which dates back to 1829. While this lends the sport a certain gravitas, and makes for a rich history filled with outstanding, larger-than-life personalities, it can also hold back scientific progress and adaptation. As Volker Nolte recently discussed in Rowing News, the first such step away from the technological advancement of the sport was the banning of the sliding rigger, but there are other examples. While I value tradition and history very highly (after all, I studied Classical Archaeology), I don’t feel that the sport has been corrupted by the technical and technological advancements that have been made over the past two centuries, nor am I worried that, should science play too large a role in coaching, we’ll wind up with a bunch of super-athletic terminator cyborgs racing in hovercrafts as we puny humans watch from the shore (although, now that I think about it, that sounds pretty entertaining in itself).

Training on land is the first thing that comes to mind when I think about the dogma (or dogmata) of rowing, and it’s clearly a still a point of contention for rowers of all ages. Look at the response to the article I wrote about rowers fearing the erg, and you’ll find that there is a deep-seated mistrust of the machine that is actually the best form of cross-training for rowing in existence. Rather than jumping on the bandwagon and making the most of what is an extremely efficient tool, many coaches and rowers look at it only as a ‘torture device,’ which doesn’t give you ‘boat feel,’ and can’t possibly simulate the exact feeling of placing a blade and initiating the drive. So instead, let’s all go running.

Looking at the erg in that way only holds you back, whether you are a coach or an athlete, and how you approach the erg can make or break a club rowing program. Club athletes, of which I was one, don’t have a ton of time to waste doing inefficient forms of training, and if the coach approaches the idea of erging as though it is some sort of awful punishment, then he or she will inevitably have a smaller, slower team. The argument here is not that Varsity athletes have forever to do whatever, it’s that if you are not afforded any kind of luxury by the administration, you need to make the most efficient possible use of your time. There is no cross-training exercise for rowing that can compete with rowing, and no other exercise, with the possible exceptions of cross-country skiing, swimming, and boxing that can provide you with a similar workout in a limited amount of time. So when I hear about club rowing coaches trying to make joining “crew” more fun by limiting their use of that horrible, un-fun machine, it makes me physically ill.

Nobody wants to be part of a team that is afraid of using the most beneficial tool at their disposal. It doesn’t mean that you have to be an idiot, and use the erg to the point where you are causing yourself or your team injury, but you have to make use of it. Fifty years ago, when the land options weren’t as well developed, there was more need of “cross-training” in the terms we usually think of it. Now, shying away from the erg just makes you look backward and out of touch. The workout that it provides is very difficult, and it holds everyone to the same level of accountability. Is that really so scary? If it is, then I’m glad we’re not racing together, because I bet you’re sandbagging.

Another ‘dogmatic’ issue is that of rigging. Coaches need to think about rigging according to the style they teach and the nature of their crew. So often it seems that coaches take their cues from people in the gym, using the ergs (poorly) with the vent setting on 10, because “harder is better.” If you have a bunch of ‘light heavyweights,’ as many smaller programs do, then it doesn’t make sense for you to rig your boat or your oars the way that the US National Team does. They have an eight filled with guys averaging 6’4″ and in the range of 200-220 lbs. You, more than likely, do not. A further example: if you are using fatty blades, then it calls for an adjustment from where you set your outboard when you use regular smoothies. Obvious, right? Then why is it that so few coaches seem to operate with the apparent motive that going fast is better than just pulling hard?

If you are committed to giving your team every possible advantage, because you are committed to going as fast as possible, then you already know all of this. If you think that none of this is that important because it’s the experience that counts, then good luck. The experience is always, always better for the team and everyone involved if there is a clear focus drive from the top down to compete at the highest level possible. The point of a team is to come together in pursuit of a collective goal. Too often it seems that people confuse this with the idea of a “club,” which has only to do with coming together around a specific interest and enjoying that interest. A team has all of that, in addition to a main focus on competition and achievement. That is what makes the experience so powerful, and so important. It teaches the athlete how to make personal sacrifices in the name of a larger goal, alongside his or her teammates, who make the same sacrifices for him or her. It’s more than just “hanging out,” it is a journey. If the leader, here coach, doesn’t appear to be doing everything in his or her power to help the team achieve its goal, then why should the athletes?

If you, as the coach, think that you are, in fact, doing everything in your power to help your team succeed, then you must be able to answer the question posed at the outset of this article, “why?” If you can’t provide answers for why you are doing the things you do in practice, then there is a problem. Being committed to helping your athletes achieve to their potential is more than just a matter of time — each exercise, drill, and piece must be the outcome of a long thought process, not simply a ‘knee-jerk’ reaction or unconscious repetition. This is why the best coaches never stop asking questions. Arrogance leads down the same path as indifference, while confidence is born of engagement and experience.

What kind of coach do you want to be?

One thought on “Guest post: Bryan Kitch. The Dogma of Rowing: When Tradition Competes with Reason”

Posted on July 28, 2015October 28, 2020 by Rebecca Caroe
Dealing with groups of humans means you have a Pluto. Big group. Small group. Doesn’t matter. There is… read more

Posted on September 30, 2015October 28, 2020 by Rebecca Caroe
It’s the new rowing year and every club will be recruiting athletes and coxswains and coaches. Get your… read more 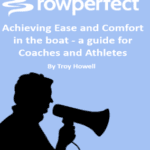 The Ultimate Guide for Comfort in a Rowing Boat

Posted on April 13, 2016October 23, 2020 by Rebecca Caroe
For everyone who’s every been frightened of tipping out, capsizing or does not feel at ease in a… read more