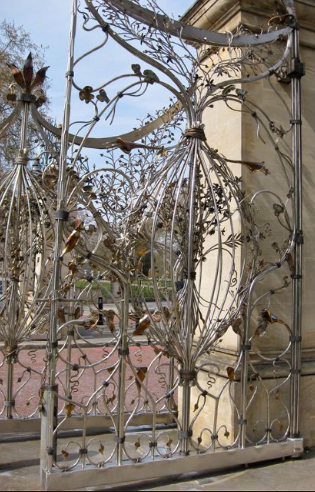 Hyde Park gates by Giuseppe Lund [photo credit: Wolfweave][/caption]When we put a call out for reviewers of Jimmy Joy’s latest book, the Quantum Sculler, we were delighted that one of the first respondents was Giuseppe Lund. 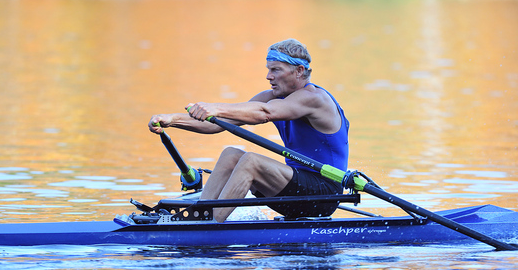 Giuseppe Lund [Photo by P. Courtney | Sportgraphics.com][/caption]Unbeknownst to me, he’s an amazing creative metalworking talent.  Any Briton who’s driven around Hyde Park Corner in London and through the entrance gates to Hyde Park has been close to his work – commissioned by the Nation in memory of the Queen Mother these are his work.

Review of the Quantum Sculler by Jimmy Joy

This is a refreshing and inspiring book. At first it is easy to imagine that you have opened a passage in the Prophet, or, if you are old enough you may have flashbacks to Sartre’s existentialism.

The clear message is to live in the present and to shed our tendency as scullers or coaches to fragment the process of moving the body, shell and blades with the water. A purist might question the analogy with the quantum model where energy is found in discrete packets or states but the message of interconnectedness in all things is still clearly expressed. Deceptively simplistic in approach, it contains a lifetime of observation and sensitive coaching.

Anyone who teaches physical skills will benefit from reading this, particularly as it serves to remind us that our rational tendency to compartmentalize a chain into its individual links can often lead to confusion and frustration rather than the desired achievement of flow. Experience enables us to spot a problem in a link , but can blind us to the importance of remaining focused on the whole continuous process.

This book draws attention to the need for a meditative awareness of ourselves, the tools and the environment. Scullers will find clear instructions to smooth their skills both mentally and physically. To the uninitiated it may appear to assume knowledge of unfamiliar concepts but will inspire those who see the clues to explore further.

For those of us who spend a lot of time alone on the water , it provides some excellent aids to visualization and awareness without the negative clutter of self criticism which can so often cause us to miss the pure pleasure of where we are and what a privilege it is to be there.

More about the Queen Mother Gates

Queen Elizabeth Gate, also known as the Queen Mother’s Gate, is an entrance consisting of two pairs and two single gates of forged stainless steel and bronze situated in Hyde Park, London, behind Apsley House at Hyde Park Corner. There is also a center feature made of painted cast iron.

It was opened by Queen Elizabeth II in 1993 to celebrate the 90th birthday of her mother, Queen Elizabeth The Queen Mother. It cost £1.5 million to construct, raised by private individuals and public funding, under the patronage of Prince Michael of Kent.[1]

The site’s architect was Richard Rogers.The stainless steel and bronze gates, railings and lights were designed and made by Giusseppe Lund.[2] The center piece, featuring a red lion and a white unicorn, was designed by sculptor David Wynne.

The organic nature of the forged steel reflects the Queen Mother’s love of flowers, particularly those from a cottage garden. Her life spanned most of the century and this is represented by a flow from formal symmetry at the base of the gates upwards to an increasing freedom of line at the top. Many of the elements are free to move when touched and the whole structure vibrates when moved. This is in direct contrast to the heavier rectilinear gates found in other entrances to the park.

Although much admired there were initial concerns that the metal was rusting due to a misunderstanding of the nature of the gate’s coloring which was in fact a deliberate creation of chromium oxides with the application of heat. This treatment has since proved to be extremely durable thanks to the initial intensifying of the chromium content on the surface by the use of electro-polishing

Posted on June 29, 2012October 12, 2020 by Rebecca Caroe
Here’s your weekly opportunity to enjoy tales from others who also love rowing. This weekly round-up is for… read more

Posted on October 26, 2018October 15, 2020 by Rebecca Caroe
The provisional start draw is out for the WEHORR. Take a read. We got a lovely message from… read more