The subject of the call was the next steps for FISA. The report states “the surprise result of the Sochi investigation was the revelation of the extent of State oversight and directed control of the Moscow Laboratory in processing, and covering up urine samples of Russian athletes from virtually all sports before and after the Sochi Games.”

WADA: the recommendation by the WADA Executive Committee that the IOC and the IPC consider declining all entries submitted by the Russian Olympic Committee and the Russian Paralympic Committee for Rio2016. It also recommended that IFs from sports implicated in the McLaren report consider their responsibilities under the World Anti-Doping Code with regard to their Russian National Federations.

IOC: the IOC will start disciplinary actions related to Russian Ministry of Sport officials, explore legal options with regard to a collective ban of all Russian athletes, take steps to limit involvement in sports events in Russia, exclude Russian politicians from accreditations in Rio, reanalyze samples from Sochi, among several other steps. The FISA EC carefully noted that the IOC asks all IFs for a full inquiry and, in case of implication in infringements of the World Anti-Doping Code, sanctions against Russian National Federations. In addition, the IOC Executive Board supported the announcement of the Olympic Summit on 21 June 2016 to reverse the “presumption of innocence” of athletes from Russia with regard to doping. “This means that the eligibility of each Russian athlete will have to be decided by his or her International Federation (IF) based on an individual analysis of his or her international anti-doping record.”

The FISA Executive Committee, at this point, has initiated the following actions:

FISA has immediately requested that WADA supply the evidence related to rowing and rowers, presented in the McLaren report,
FISA is undertaking a complete review of testing of Russian rowers since 2011, in accordance with the Olympic Summit declaration;
FISA has engaged external, independent legal counsel to determine what are possible legally sustainable actions if the McLaren report evidence confirms the allegations;
FISA has written to the IOC to ask if there is a deadline for the re-allocation of any possible quota slots if there would be a blanket ban on the Russian team or any other ban. Russia has five crews in the Rio Olympic Games and two crews in the Paralympic Games.
FISA will facilitate a meeting of IFs on Thursday morning, 21 July 2016 to exchange information and understanding of the McLaren report;
FISA has asked WADA to hold a meeting with IFs immediately following the release of the evidence referred to in the McLaren report.

The fight against doping and protecting the integrity of rowing and its athletes are top priorities for FISA which has spearheaded the implementation of doping controls as well as other important anti-doping measures. FISA continuously monitors all testing of rowers in the world, in accordance with its rules and, as outlined in its Anti-Doping Bye Laws, FISA follows World Anti-Doping Code’s procedure for testing, notification and the hearing of all doping cases. The FISA Anti-Doping Bye-Laws can be found here: http://www.worldrowing.com/mm//Document/General/General/11/81/20/Website_Revised2015FISAAntiDopingBye-Laws181214CLEAN_Neutral.pdf

Questions should be directed to info@fisa.org related to this issue.

Posted on October 8, 2012October 28, 2020 by Brad James
Ever wondered what it’s like to be an Olympic Athlete? What it’s like behind the scenes at the… read more 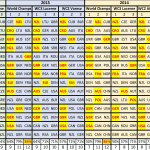 How to Win an Olympic Rowing Medal