Some of you may know a little about Steve Fairbairn. Long time Jesus College coach, founder of the London Head of the River Race, originator, or a least populariser of, many sayings still current in our sport.

I have been re-reading his collected works this summer with much enjoyment. Much of his technical stuff has been superseded because of improvements in equipment and knowledge, his wisdom on coaching is still relevant though.

‘Saying Nothing is Often Best'.

I believe in letting men alone as much as possible when rowing in an eight, because the more leisure they have for picking up the sense and timing of the crew, the more the stroke will develop into an eight man drive. When in doubt as to what to say to a man, or whether anything need be said – say nothing.’

The whole of my teaching is teaching the oarsman how to work the oar correctly and then plenty of long rows, and plenty of racing crews together…’

View all posts from Duncan Holland

What to pack for a rowing training camp

Posted on April 12, 2017October 29, 2020 by Rebecca Caroe
Here’s a quick check list for you to ensure you haven’t forgotten anything for your training camp For… read more 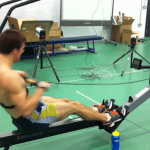 The Unseen Dangers of Rowing