At dawn on Wednesday, I quietly exited the Olympic Village, bound for life on the other side”. I felt like a Big Brother contestant leaving the house, except Davina McCall and the cheering fans were not there. On the upside, at least I was not being booed!!

The Olympic Machine was still working away flawlessly, but its components are being whittled away day-by-day as more and more athletes finish their competitions.

The mood in the Olympic Village changes as the Games progress. The people who have finished their competitions are clearly evident as body language is significantly changed when the pressure of competition is lifted.

Stressed, concentrated faces are replaced with smiley, happy, hungover people and gradually, the McDonalds in the dining hall attracts larger numbers than the healthy counters.

However, the Games go on for many others right up to the last day, which I assume is quite difficult for them as all around them gradually becomes a festival. This was my third games as a fully fledged competitor and I didnt need to soak up the Olympic Spirit any longer.

My Olympic Spirit went out when the rowing finished and I needed to get out of the bubble. The Olympics are like any other competition once you get there. You still feel the same, if not worse, pain of defeat and reminders are in your face everywhere in the Olympic Village.

As I left, the mood in the Irish Camp was good. Lots of people put in some excellent performances, performances of their careers, and the boxers are in the medals. The success of the boxers is no surprise, their quiet confidence around the village was obvious. Lets hope they continue onwards and upwards.

Us rowers, for once, were not being sold as medal prospects, and I was happy to see that people had done their homework for reporting on our sport.

It is a very tight game and it was an immense year for us. We left nothing to chance, and took care of every minute detail with the help of some fantastic people. We came up against the best in our semi-final which stunted our progress, but we would have faced those teams eventually and if you want the hardware, you must beat them all along the way.

How do you get over defeat at the Olympics? Its the same as anything else, you just have to.

Xeno writes on technique at the Olympics

Posted on August 10, 2008October 23, 2020 by Rebecca Caroe
Xeno blogs on Row2k as he watches the heats and gives his view on the wide range of… read more 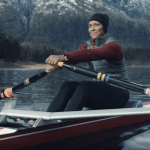