Coxmate has always lead the rowing electronics world with new products and innovations. 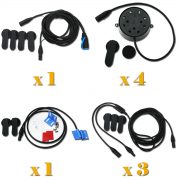 Their latest is a new speaker system for coxed boats which double the speaker capacity to 6 Watts.  Helping the crew hear the coxswain and reducing the drain on the battery is a serious innovation.

Coxmate was the first to sell a wiring loom with 4 speakers for an 8 which improves the sound distribution.

The Australian mens 8 are using the new speaker system. Read what the cox, Stuart Sim has to say….

I believe Fergus Pragnell sent you an email earlier about us having installed your gear into the boat, just thought I’d drop my own note now seeing as we have been using the system for a few weeks now. Once again, thanks so much for sending us the gear, I will be taking it overseas to the qualification regatta as it has been a good system! 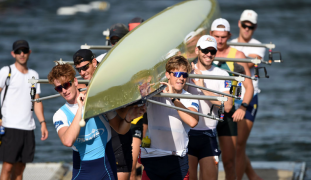 Overall I can highly recommend the Coxmate speaker system. Installation was extremely easy and was able to fit the eight with a four speaker system in around 20 minutes; not needing any tools or hardware to install.  It was a huge time saver and makes it easy to install by anyone. Sound quality was impressive to say the least. I’m hearing (and the rowers) are definitely getting a clearer sound than the previous system we had in the boat. 3 days after the install we flooded the boat during a power work out, completely submerging the speaker system as we nearly sank, and the speakers didn’t lose any clarity. The clearness of the sound allows me to keep my amplifier unit at a lower volume which saves a lot of battery.

Thanks again Peter, I’ve recommended the system in the opportune moments that I have in this short time frame already and will continue to do so. When I head back to UW I’ll see what we can do there as well.

Posted on December 17, 2010September 28, 2020 by Mohit Gianchandani
Rowperfect UK encourages customers to try out our products before they buy. We think that the products we… read more

Posted on May 24, 2007October 23, 2020 by Rebecca Caroe
Coxmate is sponsoring Adrian Oest, a final year engineering student at Adelaide University, in a project to determine… read more