RIM vs Coxmate. Which would you recommend and how do they compare?

Rowing in Motion versus Coxmate GPS

RiM is an app which comes in two versions: for solo athletes or for teams.  It records and monitors basic data such as boat speed, distance and stoke rate.

The Coxmate GPS is a waterproof sports computer.

So firstly, the software has broadly similar features for both. Coxmate does not have a display stroke acceleration curve live in the boa but does have it in the post-outing analysis software. However one advantage RiM has over Coxmate despite providing less data is that the data is more easily readable since you are reading it off a smartphone.

The principal difference from your point of view is – do you want to take your phone in a boat or use a waterproof watersport computer?

Coxmate will provide you with more accurate data because of a better GPS chip. The GPS chip inside a phone is 1 Hz, a much lower specification than the Coxmate – which is 10 Hz. This 1 Hz chip is not designed for the rapid data input/output that rowing demands. What this means is it is slow to update in real time. This will show up when you do intervals – it can take 10 or more strokes for the RiM to ‘settle’ into the correct rate and speed data display because of the slower chip. And if you are doing 10 stroke pieces, the piece is over before you’ve got the information.

If you are not satisfied with the amount and quality of data from the app, RiM sells a SensorBox which can be purchased via their website. This box is linked to the RiM application and comes at the hefty price of Euros €1,000 and offers data analysis capabilities similar to the Coxmate GPS.  Importantly both the Sensorbox and Coxmate GPS use the 10Hz GPS chip.

What makes RiM unique is a feature called coaching. This feature allows your coach to monitor your data live on his smartphone or tablet. As a coach you can capture videos automatically synchronizing measurement data from the rowing boat with the recorded video. The applications communicate via WiFi networks. All the data is recorded and available for analysis and archived in their online tool called Analytics. If you are using the solo application Analytics is free but if you are using the team version of RiM it will cost you from €295 annually. There is a free version of this application but it is limited to 100 strokes per session and the coach can only analyse 50 strokes. Also worth noting is that you need a waterproof smartphone or a cover.

Download the pdf of the image below. Comparison Table Of Coxmate Products (1) 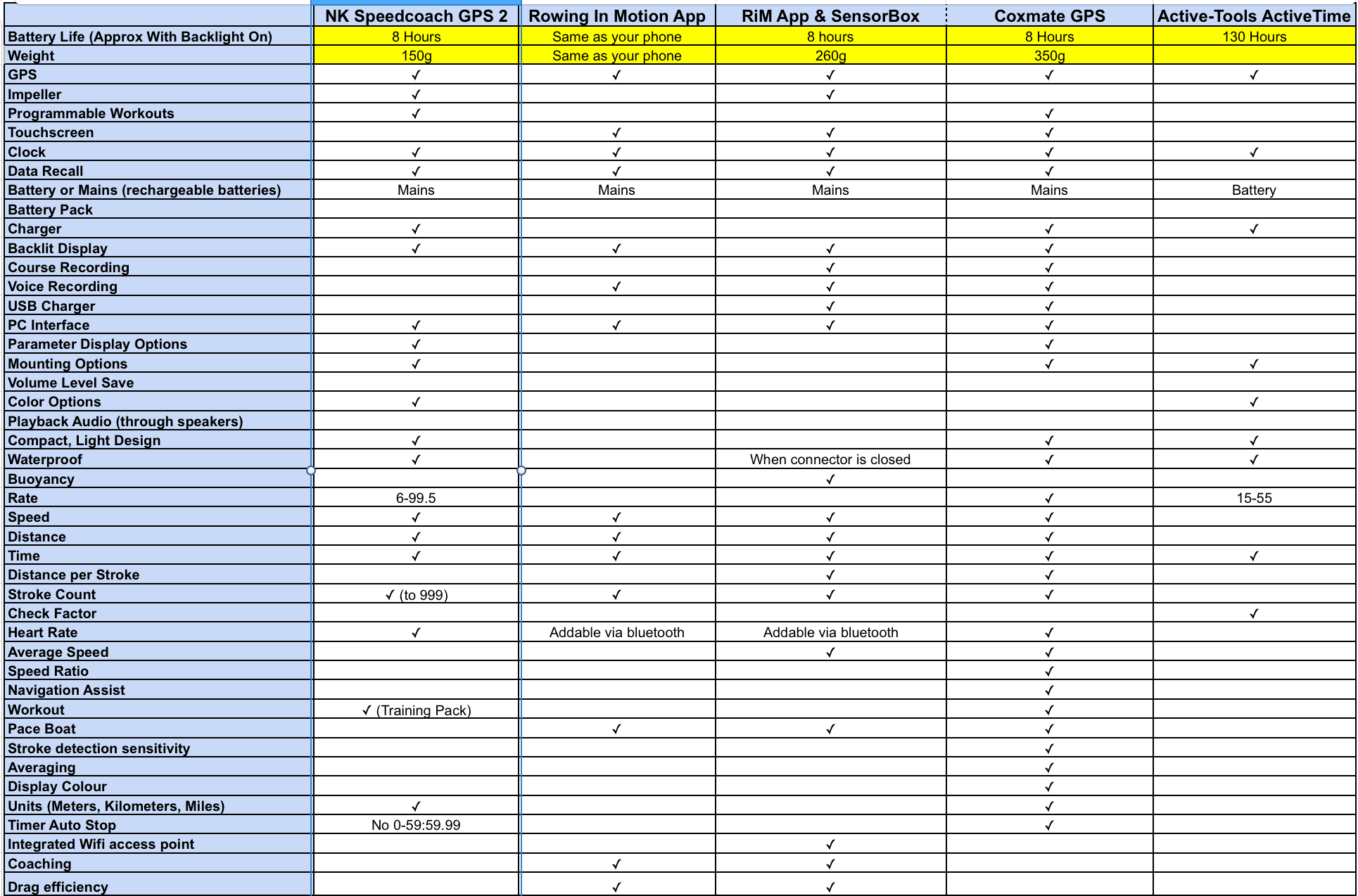 4 thoughts on “Comparison Coxmate GPS and Rowing In Motion”

Winning over the postal strike

Posted on October 26, 2009October 21, 2020 by Rebecca Caroe
Rowperfect customer Gareth Duffill was desperate to get hold of his new scullers rear view mirror before a… read more

Posted on March 11, 2016October 23, 2020 by Rebecca Caroe
Calling all lighties and coaches of lightweights –  for the first time we have a specialist lightweight rowing… read more