OK I’ll give you three reasons to pick it up and read it:

In all the above cases as stated very early on the book you’ll be in need of, “a dose of common sense, a willingness to learn and 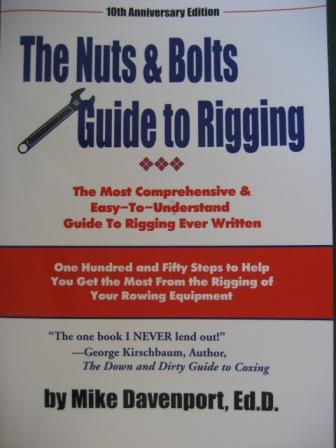 a solid work ethic” and further just as Mike Davenport quotes – “Sit down with your favourite drink in a comfortable place and read and learn.” That’s what this book is designed to do in many small logical steps, taking the big issues apart into small understandable and therefore manageable jobs. From that point on read it cover to cover irrespective of whether a boat requires rigging in the next five minutes, someone else will have to look after that problem for now.

If you were to ask if it’s it written by someone with a pedigree in the sport? The answer is an affirmative as Mike Davenport has seen the changes on-going in rowing and sculling from starting as a university novice in 1975 working through to Boatman for the US Olympic Team in 1996; and he still going strong, wholly engaged in the US Rowing and Coaching Education programme; and he recognises that the changes are still on-going too.

It is written in a style of the very much the parochial “sit down with this, let me tell you, this is what you need to look at before you even think about picking up a rigger jigger, or any other tool you ever think you may need to make a rowing shell go faster.”  But you could also see this work being delivered as a number of lectures to trainee Boatmen and Coaches, chapter by chapter and interfacing theory with practical’s to check that the theory is sitting in the best area of the brain for ready use.  Unfortunately for the great majority of us this Boatman’s Course only really exists in the university of life, where experience is spelt with a capital E usually mixed with expletives.  The book is designed to make you think through to obtain the answer to the problem in front of you, before Davenport confirms your thinking; so it does give you that little bit of confidence as well.  However, as all good educators do, he recognises the stages of the reader’s development and the fact that you may not know initially, which case the encouragement is there for you read on and discover.

The down side to this book is partially summed up by one of the tag lines on the front cover – The George Kirschbaum comment “The one book I NEVER lend out”; I would also add to that and say it’s one book that you NEVER leave lying round in a boat house unattended. Not only will you lose it, because it is so easy to read there is a danger is people can pick it up in the middle and having read a few pages find that it’s so easy to make changes that they proceed to alter half the club’s boathouse fleet in the blink of an eye, so that it suits them and them alone or worse still totally ineptly, all without knowing why they should or shouldn’t do so. So that is the “Boathouse Health Warning” that goes with the book.

This is the tenth anniversary edition, it’s also getting slightly dated in so much that many of the wooden shells (and indeed wooden ribbed shells) to which some of the techniques presented refer are now swinging from rafters in clubhouses, restaurants and pubs as decoration rather than an everyday feature on waterways; but do not throw it away on that count, the rigging principles in use with a modern carbon fibre/glass fibre shell are the same. The measurements and reason to take those measurements are still the same. It now inadvertently teaches you some of the physics and maths that you probably should have learned at school but you were too busy going rowing that you didn’t do the homework; only it doesn’t tell you its doing this it just puts it into a context that you can now relate to, all because you row. Some of the cartoon diagrams may look like tooling and boats that your father or mother used to row in but there is one fundmental reason for leaving them as such: “Learn from the mistakes of others as you won’t live long enough to make them all yourself!” Look and learn from the principles involved. Davenport’s not going to give you the answer to a specific problem on a modern shell but he does guide you to pick up the phone and ask the boat-builder your question hopefully with that little bit more confidence in doing so and certainly with more understanding. And therein you are learning also in never being afraid to ask for help.

It is written for the American market, and quite level-headedly so, with an eye on sales in Canada and then the rest of the English speaking world; however there are terms used which would be uncommon in the UK these days, like: 7/16th of an inch. Alright; some of you are old enough but not many, but he does explain the systems in use and is honest in telling the US to look to use the metric system for its simplicity.  And there again, perhaps it is good for UK readers to learn the old Imperial system, and fractions; as it all becomes very real if you get an old boat to restore and maintain!

How does it compare against some other works: I have a copy of Paul Thompson’s “Sculling” and therein rigging in there is dealt with in 12 pages rather than the 400+ of Davenport. Thompson doesn’t really go in depth from first principles and tooling, nor does he claim to do so. Volker Nolte’s “Rowing Faster” appears to go into more detail for a chapter than Thompson and concentrates on the numbers involved; but both are reflective in that they support Davenport’s view on where rigging fits into the development sequence making a boat go faster: Which is the fifth element out of five options! You already know these if you think: 1st is the athlete; 2nd their training; 3rd is the technique; 4th the boat equipment in use; then, and only then, how their boat rigged. Truly though it is an unfair comparison in that neither Thompson’s nor Nolte’s works are solely focused on rigging whereas Davenport’s work pertains to be little but that. All the authors tell you to adapt the information to your individual situation; such is this sport; that requires the knowledge which if you read carefully is available.

individual subject. He has taken to dealing this issue by a common route; i.e. you’re taught the methodology and metrology, now apply it to a single instead of a crew boat.

It isn’t a dry boring work; it is entertaining.  He has stayed with the cartoon diagrams to reinforce his points rather than replace them with photographs and arrows; in doing so he has put in what he needs to put in, keeping it clear and simple as an effective teaching aid.  It is just that. It is geared to the up and coming coach/boatman who should in due course take time to educate the oarsmen and women in their charge and hence lowering repair bills.  It may teach you to have the humility to admit you don’t know everything and to take the time to settle down and work out what the real underlying problem actually is.  There is a huge inference to the age old British tradition of sitting down with a decent mug of tea and analysing the problem before picking up any tooling; so, it takes you that bit longer but it also helps you get it right first time.  And therefore it saves you time and effort, removes frustration, further breakage and therefore probably money.

Money; this ebook will cost a bit, but if it teaches you as a Coach or Boatman to train your crews to rig boats correctly so that on the morning of regattas the human torque spanners with adrenalin filled arms don’t over-tighten nuts such that they rip out rigging bolts before you start the day, you have to consider you are onto a winner a with replacements costing £7.50 a time. That’s in addition to time delays seeking spares and boats off the water awaiting repair, plus the hassle of crews and Club Captains bending your ear over repair time-spans.  Do the maths, and for a little self- preservation cut out the ear-ache!  It’s a great guide to the do’s and don’ts for training others too.

I have never met Mike but I have come to the conclusion from reading the book that this is sum of many years quiet accumulation of knowledge, perhaps the occasional argument proving to a coach he was right; and some of it hard learned at the hardest edge of competition.  I can only imagine those after regatta reviews post World Championships and Olympics where expected results had not materialised and everyone has had to answer to the team’s management; down to the finest detail including why rigging was set as it was for the conditions on the day.  He has been there, but he not given us that experience, deliberately so in this text; but he has given us a fine knowledge foundation to go that far if that is where we see ourselves heading.  It is worthwhile, if you get to the end of this book and either you haven’t learned something new or been reminded of something you should have been doing all along I would be very surprised. That said, enjoy the book all the same, treat it with the respect an educational text deserves.

Posted on February 2, 2012October 21, 2020 by Rebecca Caroe
Each month subscribers to the Rowperfect newsletter are included in a free prize draw to win one of… read more

Posted on December 10, 2010October 22, 2020 by Rebecca Caroe
In case you hadn’t noticed we set a new site design live this weekend and I just wanted… read more