OK, I decided this week to branch out in search of more exotic and challenging poses to do. I came across a nice little resource, the Yoga Journal which has photos of what the asanas (yoga speak for “poses”) should look like and step by step instructions of how to do them.

So I cheerfully skipped off to college to print out some of the ones that looked interesting and even went so far as to get my camping roll mat out of the cupboard to give a bit more cushioning when I inevitably face-planted.  (It’s in a hilariously bad state, held together with duct tape and has doodles all over it from when a sibling obviously got bored while camping.  I instantly made it worse by walking over it in cycling cleats and taking some more gauges out of it.  I can only imagine the horrified looks I would receive if I took it to an actual yoga class.)  But digression!

However, then things started to go downhill.  Some observations:

In essence, all I’ve written so far can be summarised thus:

“Anna tries to run before she can walk, fails miserably and painfully and is pissed off about it.”

(I should’ve really put that at the beginning and saved you some reading.  Sorry!)

Anyway, in my (limited) experience, I can recommend these if you have problems with any of the following:

Downward facing dog, and fairly obviously, these two Seated forward bend and this Head to Knee Forward bend (though TBH any of the forward bends look pretty hamstring-destroying to me).

I don’t know about you, but I am especially bad at stretching these, out of a mixture of  always forgetting and not having found a stretch that really does is for me.  However, these two have been pretty good:

Hero (trust me – I know it looks pathetic) and reclining hero (be careful with this one – I’ve been using a pillow to prop up my shoulders as my quads are pretty tight).

A huge selection to chose from.  This Bharadvaja’s Twist and this Half Lord of the Fishes are a good place to start, working towards this one (Marichi‘s) or the noose.  There’s also a few standing ones that I’ve tried, and I liked the extended side angle, though I’ve been do a variation where you try and put your top arm vertically.

As much as the stretching is improving I am still lamentably bad at the other side of yoga, namely the whole mind-clearing thing.  It’s not so much the rage I can’t get rid of (I’m not angry ALL the time, as hard as that is to believe) and I am finding it pretty relaxing, but my brain just refuses to shut down.  It’s apparently really difficult to think about nothing. It seems that 21 years of continually planning, thinking about maths and endlessly trying to optimise everything (like this) has meant that I have developed an inner monologue which will not SHUT THE HELL UP EVER.

Suggestions welcome on how to get my brain to shut up thinking.

I thought I’d crack out the 2010 Blue Boat leggings because they are BEAUTIFUL. Compare this to c. 2 weeks previous:

Finally, I realise that this is a blog about yoga for rowers and I’ve yet to say how it has affected my rowing, if at all.  Fear not! I am “allowed” to go rowing again on Monday 😀 WoooooOOOooooo! (This break thing is rubbish).  I shall see then if it is helping me balance myself in the boat.

Now I can actually * do* all of the exercises in Chrys’ book, her circuit takes around 20 minutes.  Having augmented this with others (see above) it now takes 30-40mins a session which I’ve been doing it religiously once a day, mostly twice a day (though I can’t see myself doing that in term time).

Days till I can go rowing: 3

Can I get my legs behind my head? Nearly!

Unpredicted bonus to yoga: Room is hoovered often (necessity as my room could easily receive official status as a wasp graveyard – they get in through my continually open window, spend a few days flying into said window before dying on my carpet.  Lovely).

Lesson of the week: Watching food programs makes you hungry (yes, you “Great British Bake-off” with your goddam delicious-looking scones).  When you’re NOT ROWING (sad face) this is a BAD IDEA and will quickly turn you into what is commonly known as a FAT BASTARD.

How I was incredibly lame this week: Turned an unremarkable grey t-shirt into a “Shut up legs!” t-shirt (via the cyclist Jens Voigt – keep hitting F5!).  What makes this more lame is the fact that I think this is awesome.

Posted on December 14, 2007October 23, 2020 by Rebecca Caroe
I had the pleasure of testing the Coxmate SCT in the last Fours Head and I was really… read more

Posted on September 30, 2018October 14, 2020 by Tobi
Facebook actually filters what you see on your news feed. Because of this, people miss out on news, articles,… read more 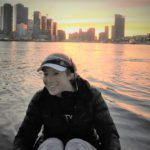