Andrew Abrahams is no hero, nor a professional athlete, but an ordinary Aussie lifesaver from Brisbane who will embark on one of the toughest nautical challenges. Andrew is set to spend three months rowing across the Atlantic ocean with a mission to raise $500k in funds for medical research into child cancer.

Andrew will be rowing the Atlantic Ocean Solo on the 4th of December 2011 starting from La Gomera, Canary Islands to Port St. Charles, Barbados. The race spans 5000 kilometers and is apparently known as the Ultimate Test of Strength and Endurance. In his journey he will have to face 10 meter high waves and experience wildlife at its best-some not so friendly.

Before he sets on his epic journey, in the next

twelve months he would be attempting several world records to stretch his mental and physical capabilities. In May 2011, he will be taking part in the Million Meter Row. The competition involves non stop indoor rowing for five and a half days.

During the course of time he will be coached by Dr. Patrick Weinrauch, one of the three Australians who have rowed the Woodvale Atlantic Race. The same race would be Andrew’s second fundraising adventure for the Children’s Cancer Research Institute.

Posted on June 11, 2012October 28, 2020 by Rebecca Caroe
Rowing – The Rules is a humorous poster in which blogger Anna Railton sets out the 50 Rules… read more 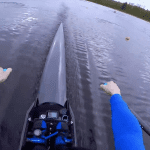 Posted on September 11, 2017October 14, 2020 by Rebecca Caroe
Sam Wilson at Janousek Stampfli writes to follow the article Can I buy my own Rowing Shoes From… read more